Sara's death has the Arrow team grieving while chasing a murderous archer across Starling City.

The second episode of season three, "Sara", brings Arrow back to a sensible pace and feels a lot closer to what I've come to expect from the show. It delivers a lot of introspection that helps make up for the plot-heavy premiere. The premiere ended on the sudden and unexpected death of Sara Lance, a.k.a. Black Canary. She had just returned to Starling City for an unspecified reason when someone put three arrows neatly through her chest. Laurel, overwhelmed with grief and unable to bring the body of her vigilante sister to anyone else, goes to the Arrow's hideout. Oliver is determined to catch Sara's killer, and he fights to keep one step ahead of his grief by throwing himself into investigating her death. Diggle returns, as always the keel to Oliver's emotional boat, insisting that he's back on the team until the killer is caught. The archer that took out Sara seems to be making it easy on the team, because he's out skewering other Starling City residents.

Diggle and Lila use the A.R.G.U.S. database to get some leads on the killer's identity, eventually picking out Simon Lacroix (played by Matt Ward). Going by the alias Komodo, Lacroix is a Québec-born international assassin, and Felicity tracks him down by finding burner cell phones in Starling City that have been making calls to the small Canadian town where Lacroix's mother lives. The ensuing motorcycle fight between Oliver and Lacroix is not as energetic or exciting as some other Arrow fight scenes. I'm sure that what the stunt drivers are doing on the motorcycles is difficult and technically impressive but it doesn't look as fantastically cool as the later climactic fight. The motorcycle fight scene adds variety to Arrow's action sequences, and despite not resonating with me, it's good to see that the writers are continuing to deliver creative fight scenes. 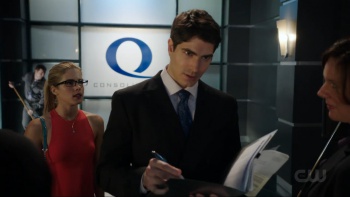 Laurel is starting to take justice into her own hands in this episode, not content with Oliver's promise that he'll stop Komodo. It's this shift from being willing to support the vigilante, to being willing to be a vigilante herself, that is going to drive her character this season, and it is already building some needed tension between her and Oliver.

Overall, the dynamic of Team Arrow is starting to change, with Felicity feeling disconnected from Oliver over his reaction to Sara's death and wondering about the direction of her life. Oliver has been a huge source of emotional pain for Felicity in this episode and in the premiere, so it makes sense for her to pull away from him, but the direction she's going doesn't necessarily offer a better path. Dr. Ray Palmer, the new head of Queen Consolidated, continues to try to manipulate Felicity into coming to work for him, sending her flowers and going as far as buying up the retail chain where she works. Ray Palmer seems like he's genuinely committed to making the city a better place, but if he's willing to go that far just to get someone to work for him, what else is the man Felicity calls "the creepiest form of stalker I've ever had to deal with" capable of?

Arrow airs Wednesday nights at 8/7c on The CW. You can also watch the latest episodes on The CW's website and Hulu. Spoilers ahead!