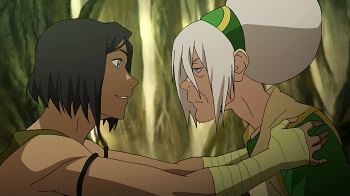 "Looking? Found someone you have, eh?"

Sure, Korra and Toph training in the swamp isn't exactly Luke and Yoda on Dagobah, but it's close enough.

Korra has found the Blind Bandit herself, Toph Beifong, while searching for a way to get past her trauma and "get back into Avatar fighting shape." Living in a swamp, the first metalbender and former Chief of Police for Republic City hasn't lost her edge. How much she tears into Korra would be overkill, but it's Toph, so it all actually makes perfect sense, especially since she's been living in the swamp and hasn't had anyone to insult.

Of course, Toph is untouchable when her and Korra practice, and while Toph's advice isn't as eloquent at Master Yoda's, she still has plenty to teach the Avatar. Beyond "Stop thinking" and "Everything is connected," Toph also points out that Korra still has some of the metal poison in her body from the Red Lotus. While her daughter, Suyin, may have not gotten it all, Toph is confident she can remove it - if Korra could just relax.

Seeing flashes of her near death at the hands of Zaheer, Korra can't calm herself enough for Toph to remove the metal. Frustrated, Toph calls Korra out, claiming that maybe she is afraid of getting back in shape, afraid to get back into the fight and risk her life. It's harsh, but who else besides Toph could have said that to the Avatar (besides everyone trying to kill her, I guess). Whether true or not, it looks like Korra has a bit more work and exploring to do before she can return to the global stage.

In regard to the return of Toph, she's great. Rude, short-tempered, and creative with her insults, seeing her pick on Korra brings back memories of her training Aang. The biggest difference is that while she complains about having to help the Avatar, she seems more than willing, even excited, to do so. Character development! Hopefully we get to see her throw down with some baddies later on, because it looks like we won't get much more of her and Korra in the swamp.

Prince Wu, saddened from losing the Earth Kingdom, ends up bonding a bit with Mako, who is hurt by the confrontation with his brother. It looks like this duo will be stuck together for a while longer. Mako can't seem to help himself from protecting the would-be-king, while the general public kinda hate Wu's guts. I actually look forward to seeing what effect they have on each other.

The outlandish Varrick is making some moves in this episode, too. After we get some clarification for why he's allowed in Republic City after attacking the president (way back in Book Two), Varrick grabs some of the spirit vines that have been growing in the city since Harmonic Convergence almost four years ago. Hooking the plant up to some machinery, Varrick claims, "This is going to change everything." It's a mystery with no real clues, but it must be heavy with significance, given that the episode closes on that moment.

Bottom Line: It's hard to top an episode like last week's "Korra Alone", and "The Coronation" doesn't even try. What it does do is offer some great scenes with Korra and Toph and reveals what's at stake for the rest of the season.

Recommendation: It's the Toph Beifong episode. People would (and should) watch this, even if the rest of it was nothing but Mako brooding.