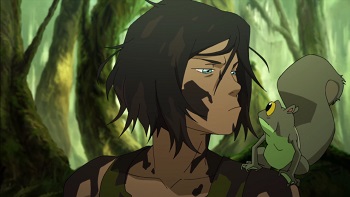 "The Coronation" of the Earth King doesn't go as planned while Korra trains in a swamp far, far away.

Many people are calling the last episode of Legend of Korra, "Korra Alone", the best episode in the series (in some cases even out of ATLA). It's a difficult act to follow, for sure, but "The Coronation" succeeds by balancing the scenes that people have been pumped for since the reveal at the end of the last episode with major advancements in the seasonal arc.

Kuvira makes her big move and upsets global politics while the world leaders ask, "Where is Korra?" The Avatar continues her journey to heal herself after her fight with Zaheer three years earlier, but gets more than she bargained for in an isolated swamp. It's definitely one of the most action light episodes of the series, but it's not likely anyone noticed thanks to captivating dialogue that is either hilarious or tense.

Any further discussion requires a hefty spoiler tag, so if you haven't watched the episode yet, spoilers ahead!! Episodes of Legend of Korra: Book Four are released on Nick's website on Friday mornings, with both of the previous episodes available to view now. The first two seasons are available on Amazon, with Book Three on Vudu.

Also, a quick reminder that the Legend of Korra game from Platinum is scheduled to land next week for PS3, PS4, PC, XB360, and Xbox One.

In the review for the season premiere, I inaccurately called Kuvira a villain. As far as we had seen, her role was simply to secure the Earth Kingdom from bandits, though perhaps her tactics were questionable. The metalbender refused to help those that did not pledge loyalty to her, and one local leader pointed out this tactic was meant to secure the metal resources throughout the kingdom.

"The Coronation" actually clarifies a Kuvira's role early in the episode: her temporary position was to clean up the Earth Kingdom, on the condition that she relinquish control once the Earth Prince, Wu, was crowned king. Wu is the perfect example of someone not fit to rule, concerning himself with dance routines for his coronation while trusting advisors to handle the leadership stuff. Most people, including his bodyguard Mako, aren't confident that making him ruler is the best idea, especially Kuvira. 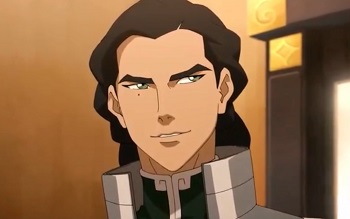 At Wu's coronation, Kuvira makes her stand, claiming that the Earth Kingdom is now her Earth Empire. She states she will crush any who oppose her or enter her lands. Knowing she controls the metal supply the world needs, the world leaders, including President Raiko, Tenzin, and the current Firelord (Zuko's daughter) won't retaliate. Now "villain" is starting to look like it might be an appropriate title for Kuvira.

Still, when one of her people, Bolin, questions the declaration, Kuvira softens. Eloquently, she explains the need to use a firm hand to ensure the safety of the people of the Earth Empire. Perhaps this is just a way to keep Bolin under her command - a useful tactic if his friend, the Avatar, shows up - but regardless, her argument makes sense. Bolin is even able to defend her actions to his own brother, even if he has to quote Kuvira word for word.

So far though, "antagonist", as opposed to "villain", is really the best word to describe Kuvira: she may not be right, but she's not wrong. Her actions would likely defend people that have been oppressed for over a century, and Bolin points out that the classism in place last season and even during Avatar: The Last Airbender is over. Unless Kuvira has some hidden, sinister plan, she's really just opposing the established leaders with a different ideology.

That's what's most refreshing about Legend of Korra. Each season the antagonists become more and more realistic and complex. We've come from Firelord Ozai ("BURN IT ALL!") to Zaheer ("We can only be balanced if we destroy the established systems.") and now we have Kuvira, who may actually have a decent point. Of course, that's what's scary about some the evilest characters in fiction and most maniacal people in history: they're so convincing.

In response to Kuvira's moves, Tenzin sends his three eldest children to find Avatar Korra, who is currently training in a swamp...