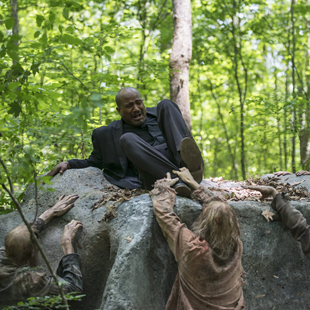 Before we get there, the episode treats us to some surprisingly good character moments. Especially involving Bob Stookey, now bonding rather intensely with Tyrese's sister Sasha. We get a real glimpse into his outlook as the two of them play a game in which she says something accurate about their miserable situation, and he puts the best possible spin on things. It's nice to see the show finally doing something with Bob, who until very recently was simply a glorified extra with a lot more dialogue and WAIT HANG ON. Is this a black male cast member suddenly getting a lot of dialogue and serious character development? Uh oh, that's a bad sign. Well, at least the show hasn't introduced any new black male characters.

Just kidding. The priest I mentioned is Father Gabriel, played by new series regular Seth Gilliam. Screaming for help, Gabriel is saved by our survivors. His first act after being rescued is to puke his breakfast all over the ground. Clearly he's not a violent, ruthless killer. He insists he hasn't killed any walkers or people, telling Rick and co. that he trusts in God to provide for him. If that sounds crazy to you, good. Obviously, a nonviolent person with an inability to exercise basic survival tactics having survived a zombie apocalypse for this long is a bit fishy. Our survivors think so too, especially because, the night before, Daryl noticed that something, or someone, lurking about their campsite. They suspect that might have been their new priestly friend. He denies this of course.

Nailing home the episode's theme, Gabriel, when asked at gunpoint what he has "done", presumably meaning done to survive, tells Rick "I'm a sinner. I sin almost every day. But those sins I confess to god, not strangers." Good to know, especially as Rick and co. 'escort' Gabriel back to his church. Hey wait, isn't that where confessions traditionally happen? Why yes, but don't worry, we don't get to that until later. For now, with the group never once hiding the fact that they are hardened killers, we get a great demonstration of how they have transformed. While we know they're as close to the good guys as it gets in this nightmare world, to Gabriel they're just a bunch of random, well-armed strangers. Finally, we see how terrifying they must appear. 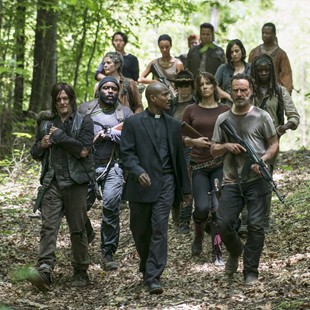 The church looks weirdly upkept despite having one occupant with, as we've noted, no advanced survival skills. Inside, it looks hardly different from before things went south, and the camera takes a moment to linger on the mementos Gabriel has been keeping. We see photos of him with parishioners, Sunday school drawings made with crayons, and other signs that this was once the center of a small community. So where did that community go, and why is Gabriel the only one left? The answer probably isn't good.

The survivors learn that Gabriel is out of food, having recently reached the end of supplies from a canned-food drive completed, so he says, literally just before civilization collapsed. However, he knows of a pantry in the nearby small town where there might still be some food. Rick, Maggie, Tara, Glenn, Bob, Sasha and Michonne decide to head into town with an extremely reluctant Gabriel to show them the way, while the others stay behind to scope out the scene and make sure things are secure. But before leaving, Rick stops to give Carl some excellent advice. "You are not safe, no matter how many people are around, no matter how clear the area looks," Rick says. "No matter what anyone says no matter what you think, you are not safe. It only takes one second and it's over. Never let your guard down, ever."

Carl agrees, but like Glenn in last week's episode, he implores Rick that despite that, they can still do good, they can still help people. They don't have to be monsters. Rick appears to agree. Even so, he's not taking any chances. It's made clear to Gabriel that he doesn't have a choice but to do whatever he's told. Yikes.