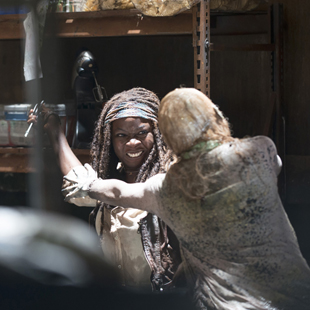 In town, our survivors discover that the pantry's floor has collapsed, allowing all rainwater and, probably, sewage, to collect in a disgusting bath full of canned goods and zombies. Bob gets a funny joke - "if a sewer could puke, this is what it would smell like" - which reminds the viewer that he seems to be getting a lot of lines this season. That's never a good sign for underused characters on this show, is it? Anyway, they need that food, so they go in as a group, using metal shelves still upright to keep the zombies at bay. Gabriel, unfortunately, once again demonstrates how little equipped he is to deal with the situation when he sees a female walker with glasses. He panics, tries to get away, forcing Rick and co. to move from behind their cover to save him.

This allows an incredible-looking prune-skinned zombie that had been completely submerged to attack Bob, but he's (apparently) saved at the last minute by Sasha, and insists he wasn't bitten. If you think he's lying, then you've probably read the comic and thus remember what finally happened to Dale. Anyway, our heroes return to the church with a new stash of food, where we learn that while they were gone, Carl made an interesting discovery: someone scratched "You'll burn for this" on the outside of the church. Minutes earlier, Gabriel confirmed to Rick that he'd known the zombie wearing glasses, so I think we can guess what happened.

But Rick and co. won't, not for now anyway. While the episode's theme of confession and redemption has prompted several characters to unburden themselves of their sins to one another, other characters are keeping their thoughts to themselves. Rick therefore allows Gabriel to do the same, though that night, while the survivors are having a cookout inside the church, Rick tells Gabriel that while he respects Gabriel's wish to keep his secrets to himself, if Rick discovers those secrets can hurt his friends, he'll kill Gabriel without question.

The larger atmosphere of camaraderie prompts Abraham to give a rousing speech in favor of the group traveling with him, Rosalita, and "Dr." Porter to Washington, where they believe they can finally put an end to the zombie menace once and for all. Earlier in the episode, multiple characters told Abraham that while they supported his mission and wanted to go with his group, they were never splitting up with their friends again - if Rick and the rest didn't agree, they wouldn't leave. That won't be an issue now however, as Rick ultimately decides he wants to make the trip. Cue much rejoicing. 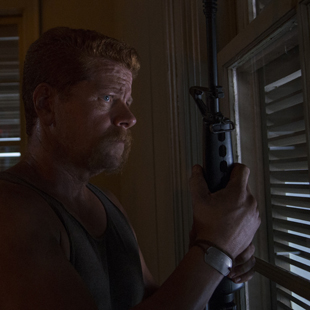 Except, that is, for Carol and for Bob. Carol has slipped off to grab supplies from a stash she'd setup earlier in the episode in the trunk of a car she and Daryl had fixed up. It looks like she's still planning to go off on her own again, though this time Daryl follows her out and tries to convince her to stay. Their conversation is interrupted, however, by the sound of a vehicle driving on a nearby road. We see the back of the vehicle and lo and behold, it's the mysterious cross car Daryl last saw when Beth disappeared. He and Carol immediately hop in their car and go chasing after cross car.

Meanwhile, remember how much character development Bob was getting? Remember how he was attacked by the waterlogged zombie? Yeah, he's doomed. During the church cookout, he is obviously covering up some tremendous unhappiness, and while everyone else celebrates their decision to head north to DC, he slips outside and wanders out into the woods nearby, where he begins to weep. It would appear he was bitten and is preparing to die, but as those of us in the audience steel ourselves for his inevitable suicide, a hooded figure pops up from the darkness and bashes him in the face. Cut to commercial.

Yep, Bob's been captured by the remnants of the totally chill hipster cannibals of Terminus. As he comes to, we see glimpses of his captors, including - I fucking knew it! - Baseball Cap Cannibal, who Tyrese claimed he'd killed at the end of last week's episode. But forget for a second how infuriating it is that Tyrese's stupidity remains unchanged, we see that Bob is bound, but sitting up, and his vision comes into focus on Gareth, leader of the totally chill hipster cannibals, casually snacking on a huge chunk of cooked meat.