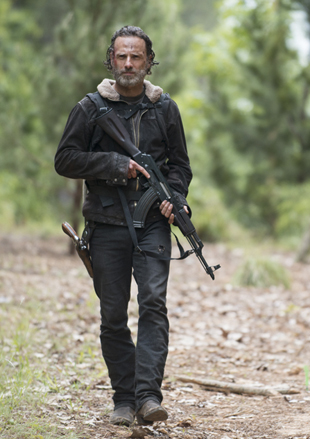 Bob knows he's fucked, but that isn't enough for Gareth. Gareth, despite his amiable demeanor, is clearly furious about the destruction of Terminus, and so he delivers a truly excellent speech to Bob, explaining to him that "everything that's going to happen" to him is basically their fault. "You and your people took away our home. That's fair play," Gareth says. "Now we're out here like everybody else, trying to survive. And in order to do that we have to hunt. We didn't start out that way, eating people. It evolved into that. We evolved. Now we've devolved. Into hunters."

It gets worse of course. "I just hope you understand that nothing happening to you is personal," Gareth continues. "We would've done this to anybody. We will." Then we pull back and see that Bob's leg has been removed from the knee down. What remains of his lower leg is currently roasting on an open fire. They're keeping him alive because they can't preserve the meat anymore, which makes the moment even more delicious. Gareth leans in, takes a giant bite out of what clearly used to be Bob's calf, and says "you know what? You taste a lot better than we thought you would."

It's an incredible moment and, for my money, up there with the show's greatest. I'm frustrated that it had to come after the reveal that our survivors will continue to be stupid whenever the plot demands it. After all, why did Bob wander off by himself? More importantly, why the hell didn't Tyrese make certain that Baseball Cap Cannibal was dead? Why did Carol take his word for it? But those questions, and the shaking of fists at the lazy way we're expected to believe people can survive despite being so goddamned dumb, will have to wait. Because Gareth and the surviving cannibals have just emerged as the first truly terrifying villains since before we knew how horrendously this show planned to waste The Governor.

Bottom Line: I'm disappointed that The Walking Dead is once again relying on stupid decision-making to move the plot forward, especially because some of it, like Tyrese failing to kill Baseball Cap Cannibal last week, was so awkwardly telegraphed. But the show at least managed some decent character development that didn't have me reaching for the nearest bottle of scotch, the stupidity seems, for now at least, to be localized to only a few characters, and that final scene, especially Gareth's creepy-rational lecture to Bob, was one of the show's all-time best.

Recommendation: Keep watching. Despite some last minute flaws, "Strangers" is a solid episode that didn't waste the audience's time (even taking the return of stupid behavior into account).

NEXT WEEK: "Four Walls and a Roof" written by Angela Kang, in which more drama and more cannibal hi-jinx happen.