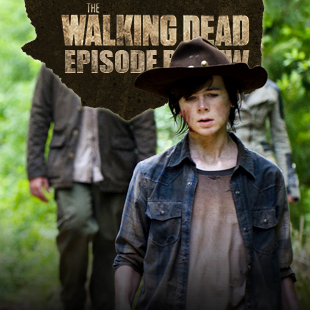 Last week, I lavishly complimented The Walking Dead for finally managing to break free from the most infuriating cliche of the horror genre: the lazy reliance on having characters making the stupidest possible decisions in order to move the plot forward. It was both exciting and a serious relief to actually feel worry for Rick's band of survivors, instead of incredible frustration that yet again, they'd gotten into trouble that could have been easily avoided, if only they'd pull their heads out of, er, the sand.

I come to you now a penitent man, humbled and taking it all back. After almost two full episodes in which our characters appeared to actually display an ability to not give in to the urge to do dumb random bullshit because the writers couldn't think of a better way to get them into perilous situations, the last 5 minutes of "Strangers" saw the return of plot-required stupidity with a vengeance. Worse, the return of situational stupidity had the effect of undermining past good behavior by revealing that, as expected, the plot device never really went away.

Fortunately, it was preceded by an otherwise solid, if hilariously unsubtle, breather episode that gave us important character beats and some delicious carnage. And better still, the episode's final moment was one for the history books, a full-on embrace of zombie apocalypse schlock that, even if readers of the comics saw it coming, still managed to leave you feeling kind of awed that the show actually went there. The Walking Dead may obstinately refuse to be good television, but it is very frequently kind of awesome.

Let's get into it. 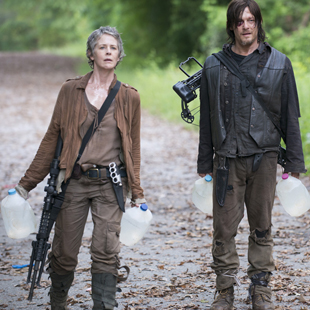 We begin, like last time, right where we left off in the previous episode. Having just escaped from Terminus after torching the place and killing a sizable number of the totally chill hipster cannibals who called it home, our survivors are once again roaming the land, looking for a safe spot to bed down for the night. Sure, maybe it was a bit daft of the group not to follow Rick's advice - "They don't get to live" - and eliminate the rest of the cannibals, but considering what they'd just been through, we'll let that slide. In any event, their escape and reunion affords them the opportunity to reconnect with one another after having spent half of the previous season separated.

Some of the reunions are unambiguously joyful. Resident marrieds Maggie and Glenn can finally spend a few moments tenderly kissing, and Rick is just overcome with all the feels now that he knows his infant daughter Judith wasn't killed by zombies. Others are more bittersweet. Tyrese and Carol come to an agreement not to talk about the things they were forced to do while wandering the land, and this leads to some distance between her and Daryl. Tara Chambler, meanwhile, is still unsure of her place in the new group (and probably has figured out by now that she's the only lesbian), while Abraham, "Dr." Porter and Rosalita remain bent on heading to Washington, D.C., but hold out for the right moment to try once again to convince Rick's survivors to go with them.

But of course, prior to the fourth season breaking of the fellowship, lots of shit went down, plenty of which needs airing out. Right off the bat, Rick finally comes to terms with Carol. Recall he's the one that banished her after learning she'd been euthanizing sick survivors back in the prison? Bygones. "I owe you everything. I still don't know about what you did, but I know you knew some things I didn't," he tell her. So it is that he asks her if she'll "have us". Meanwhile, Maggie lets Tara know that she considers her responsible for saving Glenn, which means whatever happened before, they're completely cool. Point: our survivors have apparently realized once and for all how dangerous the world really is, and how much they need one another, which provides more than enough incentive to let past transgressions slide in favor of keeping friends and family close together.

But forgiveness is a two way street, and many of the characters can't let go of the horrid things they've done. It seems half the cast is bursting with a need to confess their sins, and lucky for them, the episode makes the theme of confession and redemption hilariously explicit as our survivors stumble upon a Catholic Priest who is but seconds away from being devoured by walkers.