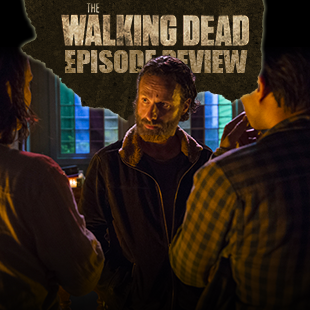 A tight, brisk episode with some of the most brutal violence yet seen, season 5, episode 3 of The Walking Dead is a gory standout, even if it remains as overwrought as always with the theme-building.

Wellp, so much for the totally chill hipster cannibals.

After two episodes that appeared to set up the Terminus group as this season's primary villains, last night's "Four Walls and a Roof" pulled off a laudable reversal of expectations. There will not be any laborious, drawing-out of those predators for 10 episodes' worth of drama, nor will there be any artificial, Cobra Commander-style escapes that depend on the protagonists being stupid enough to let them live. Instead, the Terminus cannibals were brutally and quite suddenly dispatched in one of the most violent scenes I think I've ever seen on non-premium cable television.

Angela Kang & Corey Reed, the episode's writers, deserve specific high-fives for putting yet another pithy, slightly awesome one-liner in Rick's mouth and managing to pull off an extremely fun call and response in the same scene. But the real highlight was seeing a house of worship desecrated as its walls were splattered with blood and viscera in service to a merciless form of justice that resembled human sacrifice and pagan ritual as much as it did "what if Rambo or Dirty Harry were shoved into a zombie apocalypse?".

And the weird thing? It wasn't just fun and eye-poppingly brutal, it actually worked as a means of advancing this season's themes. Sure, the episode saw the restoration of the "split the group up to create tension" dynamic that has already been mined to exhaustion. But the last seconds seem to confirm that The Walking Dead's grimly fast paced tonal shift - a much better fit for the heavy handed thematic building and banging-you-over-the-head metaphors it runs on - may just stick.

Let's jump into it.

Despite a rare (for this show) instance of every moment being necessary and crammed with important details, "Four Walls and a Roof" was a refreshingly streamlined episode. 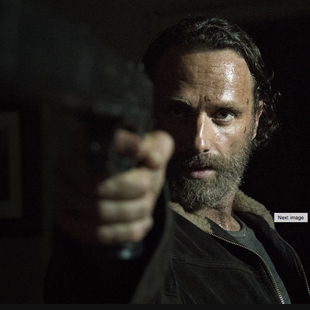 Per usual, we pick up right where we left off the previous week, with poor Bob Stookey having been captured by the totally chill hipster cannibals. While his leg is slow-roasted over an open flame, cannibal leader Gareth continues the creepy lecture we ended last week's episode with. It's an eerie scene, images of the cannibals snacking on Bob's leg juxtaposed against nearby zombies moaning and clawing to get to fresh prey. Yes, we get it, TWD, humans are the real monsters.

This time however, it becomes clear that Gareth's sociopathic indifference to zombies or Bob's pain is almost certainly a pose. His group's adoption of a humanitarian diet is fueled by incredible bitterness; they're punishing the world for going to shit rather than simply rolling with it. How do we know? Remember the older woman killed by Carol in the season premier? The one who was likely raped by the assholes who first attacked Terminus and sparked their transformation? Turns out she was Gareth's mom. We also learn that one of the people our heroes (rightfully) killed during their escape from Terminus was Gareth's brother. These people were a family. Gareth isn't just trying to survive by hunting down Rick's group (and anyone who won't join them, he reveals), they're getting revenge.

That's probably why they failed to do a spot check on Bob before cutting him up. As predicted last week (and of course, as was obvious to all of us who read the comics), Bob had indeed been bitten during last week's trip into the zombie sewer. He starts laughing uncontrollably before telling the suitably freaked out totally chill hipster cannibals that they've been eating infected meat.

Back at church, Rick and co. realize that Bob, Daryl and Carol have all disappeared at the same time, and in yet another uncharacteristic moment of actually thinking critically, they become deeply suspicious of father Gabriel. As it turns out, however, Gabriel isn't in league with anyone else, but he does confess what everyone guessed last week: he's a coward who locked his parishioners out of the church as they were being attacked by the walking dead. No time to digest that news however, because it's at that moment that the totally chill hipster cannibals dump an unconscious Bob outside the church, along with several zombies they corralled there to cover their retreat.