Varrick develops a conscience while Kuvira prepares her assault on Zaofu in "Enemy at the Gates".

Varrick and his assistant, Zhu Li, have been important figures in The Legend of Korra, but until now they have been fairly static characters. "Enemy at the Gates" is about these two side-characters just as much as it is the growing tensions between Suyin's city of Zaofu and Kuvira's Earth Empire.

Before Kuvira, the "Great Uniter" of the Earth Kindom, can take the metal city of Zaofu, both sides (and even Korra) attempt to negotiate a peaceful solution. Of course, when one side wants total control and the other wants to be left alone, it's difficult to find any sort of peace.

Varrick serves as one of Kuvira's officers, his efforts focused on developing some sort of technology based on the spirit vines that infested Republic City after the events of Book Two. He continues to be eccentric and is entirely unappreciative of his assistant, Zhu Li, who we've learned in previous seasons is far more capable than her position would imply. After this episode, however, the fate of this duo is a mystery.

The episode features a side story about Asami. It kind of comes out of nowhere and doesn't have anything to do with the main plot, but it addresses something she's struggled with for years and contributes to the theme of these characters (particularly Team Avatar) growing up. Speaking of growing up, Korra is acting with caution and maturity in reaction to Kuvira's plans.

Kuvira, self-proclaimed leader of the Earth Empire, has an impressive force of metal and earthbenders, mecha tanks, and airships. While they remained stationed in front of the metal city of Zaofu, she and Suyin debate the city's future. A flashback reveals why she left Suyin's side (to protect and unite the Earth Kingdom when Suyin refused), but how she got from "protect people" to "fascism" is still unknown. Unfortunately, if Book Four follows the trend of past seasons, the antagonist's jump from "logical concern" to "maniacal villain" will be blurry at best. 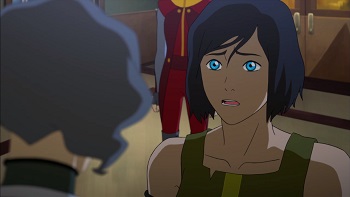 Bolin, who has been loyal to Kuvira and happy to help people caught in the Earth Kingdom's chaos, has started to question if people are really better off after their help. The poor kid doesn't even realize that "re-education camps" aren't training people for trade skills, and at the episode's ending he is sent off to one himself. Before that though, he gets a great fight scene and even gets to use some of that lavabending we saw last season.

Korra's return to the global stage is unique for the character. As she notes, in the past she would have come out fighting, but now the Avatar is reserved, hoping to negotiate peace between Kuvira and Suyin (and bring balance to the situation). Her reluctance for combat is disappointing for some, like Suyin and Meelo, and her willingness to ask the Metal Clan to comply with Kuvira at the end of the episode is a surprising display of her desire to avoid violence.