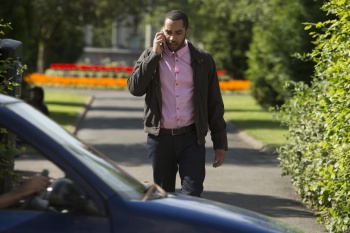 Since that chat is on hold for now, we shift gears back to the Doctor's latest abstract theory: Is there a reason every culture has some version of the afterlife? What if Heaven is somewhere tangible, within time and space, that the Tardis can get to? Flipping off all safety mechanisms, the Doctor plugs Clara back into the Tardis telepathic link to see if Danny can be found using the connection to the timeline. Somehow, it works, and the Tardis goes to Heaven. All of this seems like an impressive display of pseudo-science, but it turns out the afterlife has a simple explanation: it's not actually a spiritual realm at all.

Over the course of the Doctor's investigations, and scenes where Danny meets Heaven's "gatekeeper", we slowly piece together that Heaven isn't just a place, it's an institution. Specifically, the 3W corporation, who discovered that dead bodies continue to generate telepathic signals after death. Upon realizing this, 3W created an afterlife where these "spirits" can comfortably interact with each other in a digital world, while the bodies are preserved comfortably in some way. The woman we've caught glimpses off in past episodes is Missy, who claims to be a self-sustaining android who manages the entire operation.

It still feels like a stretch (and it's supposed to, but more on that later) but the episode is fully committed to this idea of a scientific afterlife. For example, preserving the body after death like ancient cultures did is immensely important, because if your soul never dies, it feels everything happening to the body. Whether you're buried underground, lying in a cold morgue, or being experimented on by scientists, there's no way to protect yourself, which is where 3W comes in. There's an implication that wealthy "clients" can preserve their bodies in organic water tanks to ensure their eternal comfort. But Danny Pink isn't so lucky; since he never planned for his death, the default option is cremation.

On top of that, just because the afterlife isn't spiritual doesn't mean you won't face judgement of some sort. In this case, while Danny awaits his fate, he learns that someone in Heaven is waiting to meet him. It's here that we finally see what Danny's been hiding: While he was a soldier, he unwittingly killed a child. That emotional reaction during "Into the Dalek" makes a lot of sense now, beyond a default response of not liking the military anymore. That said, Danny doesn't get time to actually speak with him, since he flees the moment Danny tries to make contact.