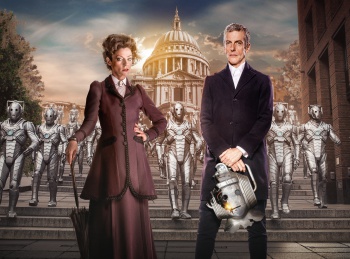 But as the Doctor notes, something doesn't add up, and this artificially constructed afterlife is more than it seems. If you caught Dark Water's promotional materials, you already knew part of the answer: it's all about Cybermen. This 3W company isn't preserving the dead, it's harvesting bodies, tucking minds away in an afterlife until they willingly delete their emotions. The exact mechanics of this system hasn't been made clear, but the Doctor notices Time Lord technology powering the machinery. That either means we're going to get a clearer picture next episode, or the whole thing will be hand waved away as some kind of time magic.

In fact, looking back the whole Cyberman reveal feels a lot like it's swapping one ridiculous pseudoscience premise for another. Creatively speaking, it leaves all kinds of plot holes, but the reveals are so well-paced dramatically that you're riveted anyway. This is especially true when you realize that several Cyberman references are hidden in the episode, like how water tanks that only show organic matter can hide their armor, or how the doorways are designed to look like their eyes.

The important plot point is that the Cybermen have a nearly unlimited supply of dead bodies to create a new army, and that's not even the worst part for Earth. It turns out that Missy was able to provide that Time Lord technology because, wait for it, she is a Time Lord! And not just any Time Lord, but one that the Doctor supposedly "left behind". If you haven't pieced her identity together yet, the final lines make it clear:

Doctor: Who are you?
Missy: Oh, you know who I am. I'm Missy.
Doctor: Who's Missy?
Missy: Please, try to keep up. Short for Mistress. Well, I couldn't very well keep calling myself the Master, now could I?

Yuuuuup. One of the Doctor's most iconic villains has returned... regenerated as a woman. Doctor Who fans have long wondered whether Time Lords could swap sexes during regeneration, and while BBC wouldn't do that for the Doctor, nothing prevents it from allowing it for his enemies. It makes the final revelation of Missy's identity that much more powerful, although now Doctor Who has to live up to the reveal. After all, we haven't really seen Missy do anything other than be enigmatic. Hopefully "Death in Heaven" gives Michelle Gomez a chance to cut loose and make this Master far more than a last-minute twist. Given her performance so far, this seems very likely.

Bottom Line: "Dark Water" feels like it's stacking pseudoscience on top of plot holes on top of shocking reveals. But for the most part, you'll just enjoy the ride as the episode completely sinks its hooks into you. Part one of the finale ties up several season-long plot threads involving Clara, Danny, and this mysterious afterlife, while presenting a human side of the Doctor we've barely seen. All "Death in Heaven" needs to do is suspend our disbelief for a while longer and Capaldi's legacy will be assured.

Recommendation: Season 8's finale isn't cohesive enough to be Doctor Who's best, but it's absolutely shaking up to be one of the most memorable. Definitely worth a watch.