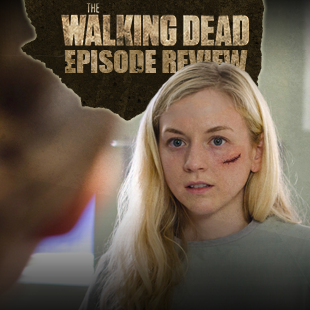 We catch up with Beth Greene and learn that there's something almost as bad as Cannibal. Fans of early 90s hip hop and zombie gore alike are vindicated.

The strongest thing about this season of The Walking dead is the way our core group of survivors are being contrasted against others who have also made it this far in a post-apocalyptic world. We've seen them struggling with their humanity for more than four seasons now, but as we've learned when they finished off a group of cannibals in last week's episode , they have a long way to go before they turn into full-on monsters.

That theme continues with "Slabtown", the fourth episode of The Walking Dead season 5, This time out, we're presented with an unfortunate truth about people: When law and order break down, the way is cleared for people who rule by fear and the threat of violence rather than informed consent to thrive. Such people usually believe their actions are, in fact, for the greater good. But what if in their previous life, they actually did serve the greater good? How would they go from public servants to marauding sociopaths?

The answer, according to this episode? "Listen to NWA". Meanwhile, we finally got to find out what Beth has been up to since she disappeared in season 4. Last seen by Daryl having been spirited away in the back of a black car with crosses painted on the windows, she's now trapped in an Atlanta hospital run by a cabal of pre-apocalypse police officers who are, so they say, attempting to save as many people as they can until civilization can be restored.

But is that all there is to the story? Of course not. But we'll get to that shortly. What's that? Yep, it's another good episode of The Walking Dead. Shocking, I know. Let's go.

We start as Beth wakes up in a hospital room at Emory University's Grady Memorial, sporting a serious bruise on her face. (Yes, it's a callback to the series' pilot.) After a short freakout, the door opens and in walks doctor Steven Edwards, accompanied by a police officer named Dawn Lerner. Beth, so they tell her, was rescued by Dawn's people from a swarm of zombies. Beth doesn't remember that, but she does remember having last been with Daryl, and in asking where he is, we learn we're in a flashback. Things look somewhat hopeful for poor Beth, until Dawn informs her that "you were alone. If we hadn't saved you, you'd be one of them. So you owe us."

The threat implied by that isn't accidental. The situation at Grady Hospital is a nightmare. As we later learn, the hospital was a rallying point for the government's efforts to deal with the undead crisis prior to everything going to hell. Dawn, along with several other officers as well as doctor Edwards, happened to be there when the US Military napalmed the city, and decided to remain holed up there rather than flee the city.

When their food ran out, they ventured out into the city to scrounge what they could, ignoring the other survivors. However, doctor Edwards finally found that practice too contradictory to his hippocratic oath after seeing a child in need of help. He convinced the police officers to take him in after noting that the child could contribute to the upkeep and essential operations of the hospital, which would give them more time to find food and supplies.

Skip ahead a year or so. While they have battery packs to power equipment and what seems to be plenty of medicine, their full time job at this point is "raiding party". They drive out in their fleet of makeshift ambulances (that explains the cross on the car, BTW), finding supplies and occasionally kidnapping people, bringing them back for slave labor couched as barter, at least as long as the police officers consider them useful. Anyone injured deemed beyond saving are killed, then tossed down an open elevator shaft, with the implied threat to the living members of the group obvious.

Dawn is the ranking officer, but she's only barely holding things together. She assumed leadership of the hospital after killing their original commanding officer when he lost his mind, and only retains authority, getting the reluctant obedience of the male officers reporting to her in exchange for turning a blind eye to the fact that they're forcing attractive women they "rescue" into sexual slavery.