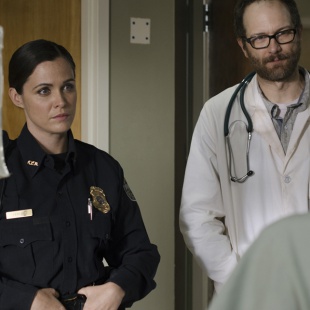 This includes a creepy douchebag named Gorman who, from the moment Beth first encounters him, makes it clear he considers the situation a license to rape. Worse, it's soon revealed that the officers enforce discipline with corporal punishment. (Obviously, Beth's injuries are consistent with having been punched, not grabbed or clawed at by zombies.)

How bad is this place? Early on, Gorman and another office drag a woman screaming and struggling into the hospital. It turns out, she's a conscriptee who she tried to escape, injuring her arm badly in the process. Dawn orders Edwards to saw off her arm to save her life, but she refuses anesthesia, implying heavily that she expects to be raped in her sleep by Gorman if she takes it.

To be clear, I said "saw". Edwards takes a length of metal wiring and uses it remove her arm just above the elbow in a terrifying scene framed like a sexual assault.

Dawn is of course going crazy too, deluding herself that what she's doing is for the greater good. In a creepy lecture that recalls Dolores Umbridge, she strongly implies that Beth not only should be grateful for having been rescued, but should willingly provide sexual favors to her male officers to keep them happy and thus more willing to protect the hospital. It's an interesting contrast to the Totally Chill Hipster Cannibals; the Terminus group devolved into monsters because they believed that the old world was dead forever; the Grady Hospital fascists have devolved into monsters and yet Dawn still believes they won't have any problem returning to normalcy once the government restores order.

That's a serious problem, as her officers have clearly long since given up on being people. I'd like to avoid a flame war over police officers in real life, but it has to be stated that this episode is fueled by anxiety about the way bullies love to throw their weight around, especially if it's sanctioned behind the trappings of legal authority. I don't think this episode is expressly tapping into unfortunate recent events, but the inherent danger in people with power losing all sense of responsibility to the public they're supposed to serve is the source of remarkable tension throughout the episode. This is the same kind of thinking that leads to totalitarianism, and just like in real life, the totalitarian system here has become the entire point, not just a means to an end.

But remember when Rick mused that the Totally Chill Hipster Cannibals were going to feel stupid when they realized who they were screwing with? Beth doesn't get to drop any cool one-liners, but throughout "Slabtown", she demonstrates just how accurate Rick was. Three seasons spent with Rick's survivors have clearly taught her more than a thing or two about survival, and rather than buckle before maniac cops, she sets about getting the lay of the land. 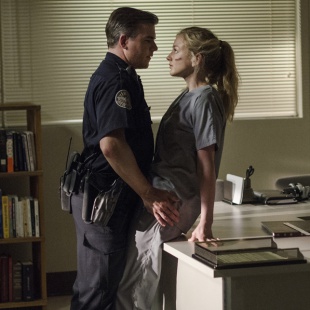 First, she bonds with Doctor Edwards, whose position as the sole medical expert gives him a small degree of freedom from the bullying the police officers inflict on everyone else. But it's a precarious situation. At one point, he saves Beth from a near-rape at Gorman's hands (short version: Gorman, who takes fascistic delight in keeping track of supplies and using his knowledge of inventory as leverage against the women imprisoned there, discovers she had a lolipop, which he forces into her mouth in a manner that suggests his penis will be next.) Gorman threatens Edwards for interrupting him, then Edwards reminds Gorman that he's the only doctor. Gorman in turn reminds Edwards that should they ever find another doctor, they won't need Edwards' services anymore.

As it turns out, one of the people they've "rescued" happens to be a surgeon Edwards knew from before the apocalypse. He's in a medically induced coma, however, and Edwards tricks Beth into administering a fatal dosage of the wrong medicine to him, removing any threat to his safety. By this point, Beth has made friends with another captive named Noah, who clued her in to the fact that no one is ever allowed to leave. He's planning to escape, he tells her, and try to make it back to Richmond, VA, where his family supposedly still lives. Noah also quickly establishes himself as someone who hasn't devolved along with his captors, taking the rap for Beth's "mistake", for which he's subjected to a severe beating. With that, Beth vows to escape with Noah as soon as he's ready.

That's easier said than done. The officers have ensured that the only (barricaded) exits are surrounded by swarms of walkers. Beth and Noah devise a plan to escape from through the basement (first descending down the elevator shaft that functions as the Grady group's body disposal system), which requires that Beth break into Dawn's office and steal the key. Inside, she finds the young woman from earlier, dead on the floor next to a pair of scissors, apparently having been murdered only minutes before. Beth rifles through Dawn's files and finds the key she needs, but Gorman barges in just in time to catch her in the act.

Gorman makes it clear that Beth can either let him rape her, or he'll turn her over to Dawn for punishment. She pretends to accept his price, but quickly demonstrates how much more effective she is than any of the residents of the hospital, first by noting that the dead woman has turned, then grabbing a glass bottle full of irony lolipops and bashing into Gorman's head. He falls to the ground and is quickly killed by the newly resurrected zombie on he floor.