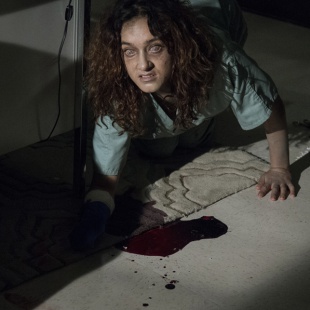 Beth and Noah then make their escape. Noah is severely injured but managed to make it out the building with her. Unfortunately, as she's covering his dash to the nearby fence - part of an exceptional sequence of headshot kills that demonstrates, again, how badass Rick's crew is - she's slowed down enough to be recaptured by Dawn and the remaining officers who clearly have a more convenient exit they haven't told anyone else about.

Back inside, Beth (having been severely beaten by Dawn for telling her how deluded she is for thinking things will ever go back to normal) confronts Edwards about his using her to commit murder. The conversation, as it turns out, is mainly a distraction so she could grab a long sharp metal object to use a weapon. She follows Edwards out of his office, and it looks like she's about to kill him (or, someone else nearby. I'm assuming it's escape plan 2.0). But then we see an unconscious new "rescuee" being wheeled into the hospital on a gurney: It's Carol, last seen leaving with Daryl to look for Beth. CREDITS.

Next week, we check in with Abe, Porter and the rest of the D.C.-bound survivors in "Self Help," written by Heather Bellson.

Tonight's episode demonstrates handily that we're done, seemingly for good, having to endure seeing our main band of survivors constantly having to learn and re-learn the same lessons over and over again. It continue the exploitative, bloody overload that's made this season so fun, but it also advances something that should have been clearer two season ago: By this point, our survivors are all seasoned and extremely hardened by bitter experience, and it shows every time they encounter other groups of survivors who have learned very different lessons since the world went to hell. Even meek little Beth is no exception, and it's kind of great.

Once again, Season 5 is shaping up to be the most consistent and high quality season in the show's history, and "Slabtown" is only bested by last week's standout featuring the death of the totally chill hipster cannibals.