Felicity's past puts the future of Starling City at risk when a hacker group targets the city.

"The Secret Origin of Felicity Smoak" gives us a glimpse into Felicity's past in an episode that is packed to the margins with DC Comics references. When hacker group Brother Eye threatens Starling City, Felicity struggles to fight back against them because the virus they are using is one she created. First, the hackers take out the city's lights, and then move on to bigger targets: everyone's bank accounts. While struggling against her own creation, Felicity's mother Donna drops in for an unexpected visit, complicating her efforts.

Through flashbacks, we learn that Felicity, her college boyfriend Cooper, and his roommate Myron dabbled in borderline illegal hactivism. A virus she wrote then (one that landed her boyfriend Cooper in jail when he used it to delete student loan records from the US Department of Education) is the same virus Brother Eye is using to attack Starling City. The Arrow Team must track down whoever is using the virus, while riots break out in the city over the hacker's threats. 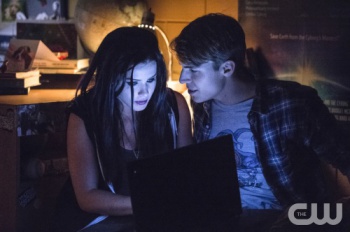 Felicity gets a well-deserved spotlight in this episode, which also delivers a solid problem-of-the-week plot for Starling City and Team Arrow. It also gives us some perspective on how Felicity feels about vigilantism, showing her in the past as someone unwilling to break the law even to do something ostensibly good (like eliminating student loan debt) but still willing to flirt a bit with civil disobedience. Felicity might not come to blows with villains often, but she's definitely now a vigilante herself as part of Team Arrow. She has clearly broken the law numerous times over the series, but largely for heroic ends. Now, she must fight something she created that is being used for evil, paralleling Oliver's own struggles with vigilantes inspired by him. While some have turned out good in the end (like Roy Harper), others (like The Huntress) have shown just how dangerous the idea of taking justice into one's own hands can be.

The character moments really make this episode. Laurel gets some honest observations about her rage from both her boxing teacher, Ted Grant, and her father. Oliver and Thea begin to mend their fractured relationship, and baby Sara makes a brief appearance with doting father Diggle. The importance of family, particularly of love without judgment, is also underlined in scenes between both Felicity and her mother, and between Oliver and Thea. With all the focus on Felicity, don't miss the lovely little touches in Felicity's home: the poster for Errol Flynn's The Adventures of Robin Hood on the wall, the little robot on her TV stand, a clock with glasses on its face, her 12 cup coffee maker. It's also nice to see that at no point in the flashbacks does Felicity get any snide remarks about her goth style, nor any cheap shots over her geeky pursuits, like coding a Linux emulator for Zork.

Arrow airs Wednesday nights at 8/7c on The CW. You can also watch the latest episodes on The CW's website and Hulu. Spoilers, comic book references, and a discussion about Oliver's flashbacks this season follows.