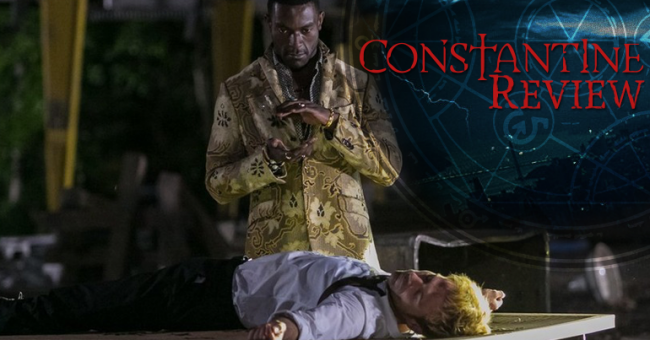 "The Devil's Vinyl" is the best Constantine episode yet, even if it stumbles and keeps making Doctor Who references.

I wasn't especially impressed with the first two outings of Constantine, although I still couldn't help but have high hopes for the series. Hellblazer's John Constantine is arguably one of the most popular comic book characters of all time that doesn't wear spandex and a cape. With 300 issues worth of stories to draw inspiration from, one would imagine these opening episodes could do more to engage the audience beyond aping shows like Supernatural.

With "The Devil's Vinyl", Constantine goes a surprisingly long way to restoring my faith in what a Hellblazer adaptation could do. It cuts loose with several unexpected twists and turns, expanding the scope of its supernatural threat while keeping the audience on its toes. There's also great references to Constantine's past and the magical world he comes from, including the introduction of a classic Hellblazer villain.

The bad news is Constantine still has flaws muddying the water. John and Zed still don't have the best chemistry. Characters don't behave in especially believable ways. And instead of copying Supernatural, Constantine seems to be taking notes from Doctor Who. (Seriously, "The Devil's Vinyl" has psychic paper and makes a "bigger on the inside" joke about the magical home base. Although I suppose that helps make the series a little more British.)

Thankfully, that's not enough to stop you from enjoying the episode. Check it out for yourself on the official NBC website or iTunes.

"The Devil's Vinyl" takes us to Chicago, where Constantine's map says evil will strike shortly before he learns that an old friend has committed suicide. Noting there's no such thing as coincidence (another Doctor Who reference!) John and Zed eventually discover the existence of a vinyl record that captured the voice of Lucifer, First of the Fallen. Now everyone who hears the soundtrack either dies or kills themselves in a horrifying fashion, and even worse, the evil inside the record keeps convincing others to listen to its contents.

But the record itself isn't the only threat Constantine needs to deal with; it's those who wish to control it. That role goes to Papa Midnite, a voodoo priest and mob boss who has a long history with Constantine himself. And unlike Constantine, who seeks the record to halt its evil, Midnite wants to make the Fallen voice recording a key addition to his magical artifact collection.

What's great about "The Devil's Vinyl" is that it's not a one-trick pony: there are several surprise twists outside of Midnite's arrival. The episode jumps across a series of seemingly unrelated developments to string together a layered supernatural mystery. Sure, the connections are tenuous at best, and barely have context beyond "the vinyl was here". But the novelty of each key scene contributes to a greater whole, while keeping the episode from following a checklist for the cursed artifact of the week.