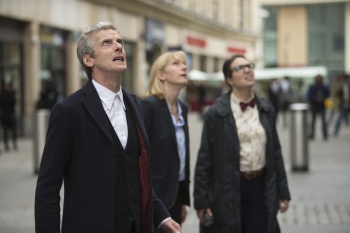 Thankfully, events involving the Doctor and Missy are much more engaging. Michelle Gomez fantastically channels the Master/Doctor love/hate relationship that made previous versions so compelling, even throwing in John Simm's sociopathy to keep things unpredictable. Capaldi, in turn, really sells the idea that Missy isn't some villain, but an old friend he can't trust any longer.

And after the Cybercloud forms in the skies, UNIT has its own surprise revelation: If an alien incursion reaches a certain threat level (which the Cybermen have), all human nations immediately turn their authority to a single Earth leader. The Doctor seems annoyed with this idea, but is shocked to discover as the most qualified person in the room, he is now the President of Earth. That is perhaps the best Doctor Who premise I have ever heard, and I would love to see more of it. Sadly, it's barely used even in this finale. The Doctor doesn't actually give any heroic speeches to armies (or dismantles armies because he thinks they're useless and violent), he just walks around his version of Air Force One for a bit before Cybermen attack and he has to think up a new solution. Still, it's a brilliant concept, and I really hope it gets brought up again in Season 9, even if just to flesh it out a little more.

Having effectively ended his short-lived presidency, Missy brilliantly starts dropping all kinds of metaphorical bombshells. First of all, she knows where Gallifrey is, although she isn't ready to share that information just yet. Also, not only was she controlling the rise of the Cybermen, she manipulated the Doctor and Clara's entire partnership. That mysterious woman who gave Clara the Doctor's phone number? The one who placed the newspaper ad in "Deep Breath" that helped them find each other? It was the Master all along, giving him a companion he would travel into Hell for, which is exactly what he did. (It's possible Missy even orchestrated hitting Danny with a car, although that's not entirely clear.)

The reason for all these manipulations? It's not to rule the world, or else she would have attacked by now. It's a little more subtle: she's providing the Doctor with his own Cyberman army. Missy isn't interested in conquering a planet anymore, she wants her oldest friend from Gallifrey back. But instead of, you know, apologizing for her crimes, she decides the Doctor needs to see that he's as sociopathic as she is. So she gives him an entire planet of Cybermen, which he can use to wipe out the Daleks, end civil wars, and bring about the peace he claims to believe in.

The past few Doctors (except maybe the War Doctor) would absolutely have turned her down. But this version has been just morally grey enough to raise a few doubts, and there's a moment where it seems like the Doctor might actually join Missy for a change. But then something amazing happens... the Doctor smiles. You know that smile. The one where he's figured out exactly what needs to be done instead of moping about this bleak universe he needs to save. And with an honest-to-God glimmer of hope in his eyes, he says:

I am not a good man! I'm not a bad man. I am not a hero. I'm definitely not a President. And no, I'm not an officer. You know what I am? I am an idiot! With a box! And a screwdriver! Passing through, helping out. Learning. I don't need an army. I never have. Cause I've got them. [points to Clara and Danny] Always them.

I've waited all season for a speech like that, from an eternally-optimistic Doctor who never compromises in the face of darkness. And wow, does Capaldi ever pull it off. It's been a long time coming, perhaps too long, but it was so very worthwhile once it finally arrived.