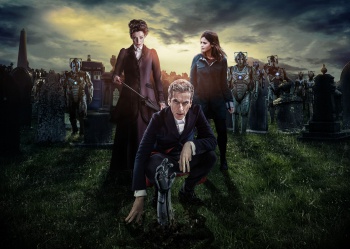 True to form, the Doctor turns control of the army to Danny Pink, realizing that even an emotionless soldier will protect those he loves. Danny leads the Cybermen into the sky and detonates, burning up the Cyber cloud before it can cause any more damage to the Earth. The Master reveals the location of Gallifrey before being struck down once again, in a absolutely perfect way that deserves not being spoiled here.

Of course, it's still a Doctor Who finale, so not all can be well. Clara has lost Danny, who knew of a way to save only one Cyberman from death, and gave it to the child he'd killed as a soldier. (Somehow. Just roll with it.) When the Doctor investigated the Master's coordinates, he couldn't find Gallifrey. So when Clara and the Doctor meet again they're both grieving, but don't want to hurt the other with their own pain. So Clara lies, saying that Danny is alive, while the Doctor lies, saying that he's returning to Gallifrey. You'd think they would have learned their lessons by now, but given the theme of the season it's oddly appropriate. So much of their stories this season revolved around deception and lies, so it's only fitting that's what causes them to part ways, even if they do it with the best of intentions.

But what it leaves us with is very promising: a fresh slate where the Twelfth Doctor can begin a new storyline without the dark baggage holding him back this season. A version of Capaldi's Doctor that can be a little more humorous and light-hearted, like we've seen in other, non-TV mediums. And while it's a little sad that Jenna Coleman's Clara (who was exceptionally well-developed this season) won't be a part of it, we'll soon have another Doctor who better reflects this new era in the Doctor's life.

I, for one, can't wait to see where it goes.

Bottom Line: "Death in Heaven" wraps up Season 8 with the glorious return of the Doctor's fabled optimism, and (miraculously) does so without sacrificing Capaldi's dark edge. While some flaws from earlier episodes still exist here, they're brought a logical, exciting, and dramatically satisfying conclusion that paves the way for future episodes. The Twelfth Doctor has just cemented his legacy as one of the greats, and Whovians new and old won't be disappointed.

Recommendation: Do you have any lingering doubts about the Twelfth Doctor? "Death in Heaven" will resolve them and leave you anxiously awaiting Season 9. Watch it.