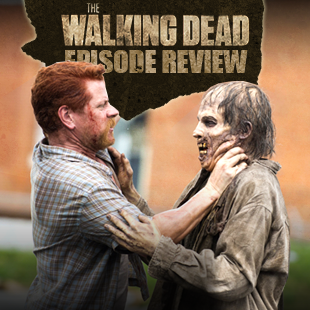 We finally get the backstory of Abraham Ford, as well as the extremely telegraphed reveal that [SPOILER REDACTED] is nothing at all like what he claims. Spoilers ho!

"Self Help", the 5th episode of season 5 of The Walking Dead makes the explicit case for something we've all suspected for a long time: mullets are not to be trusted.

Ok, I'm joking, kind of. I mean, people with mullets aren't necessarily inherently full of crap. But this episode (and the entire season) makes the mullet sported by Eugene Porter the essential clue that all is not what it seems with the man. I'm betting this plot device was necessitated in part by the fact that, with the possible exception of Michonne, Porter looks more as though he stepped off the pages of Robert Kirkman's comic series than any character ever seen in this show's history. His "Kenny Powers-meets-Dan Clowes background character" aesthetic stands out like a sore thumb next to the other survivors who don't look like straight up comic book archetypes.

That discordancy is impossible to ignore. Every time you see Porter, you think "man that guy looks ridiculous". Which is why it was refreshingly hilarious at the start of "Self Help," when Glenn, Maggie and Tara Chambler, who left Rick's core group of survivors to accompany Abraham, Rosalita and Porter on their mission to Washington, all seem to fixate on Porter's mullet as if they too realized how ridiculous it is even in context. So begins an entire episode in which someone's unfortunate fashion choices becomes a symbol of their character. Never has a party in the back and business in the front had more tragic undertones.

Those undertones lead to a reveal readers of the comic have known was coming since Porter and Abe first walked onto the screen near the end of season 4. But thanks to a deft use of flashbacks, that revelation hits like a punch to the gut, and our characters are finally forced to confront the last illusion they had about the world in which they live: that it could ever be fixed. Strong stuff. It's just too bad that otherwise, "Self Help" is a relatively bloated episode that feels more full of filler than anything previously seen. Fortunately, it just feels a bit overlong, not the excruciating slog we saw in seasons past. Even if the final moment doesn't come as a shock, it still leaves a powerful afterimage that manages to make the episode's previous excesses forgivable.

Let's jump in, shall we? 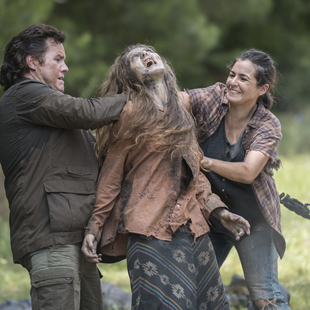 "Self Help" begins shortly after we left off back in episode 3, with Abe, Rosalita, Porter, Glenn, Maggie, and Tara packed onto a church bus and headed for Washington to deliver Porter to a purported scientific installation with the key to stopping the zombie plague. After some lighthearted conversation that includes our first mention of Porter's mullet and the fact that he doesn't exactly look like a scientist, the bus suddenly blows a tire just as Abraham is driving it through a small pack of walkers staggering across the road. He loses control and hits an abandoned car, flipping the bus onto its side and, eventually, igniting the engine. Everyone is beaten up, especially Abe, who is knocked out in the crash, triggering the first of a series of dream sequence flashbacks to his life before teaming up with Porter (more on that later).

Everyone comes-to, and Glenn and Abe quickly work out a plan to bust out of the overturned bus and make short work of the zombies now surrounding it. Everyone files out, last but not least Porter who, as usual, is frozen in terror. Tara gives him a quick pep talk, explaining that it's OK to be terrified, but when everything is probably screwed anyway, he can choose to act in a way that at least might help other people. She hands him a knife and leads him out of the bus, where we see Porter for the first time try to actually attack a zombie attempting to go after Tara. He ultimately doesn't have to make the kill, as Tara then comes to his rescue, but it's an important establishing moment.

The zombies are quickly killed, but the bus is trashed. Porter suggests they turn around and walk back to Rick's church (it turns out they're only 15 miles out), but Abe, probably concussed by the wreck and is becoming extremely irrational, clearly has his entire life wrapped up in the quest to get Porter to D.C. He freaks out and demands they keep moving forward. To keep the peace, Glenn agrees they should keep going, but insists they need to make sure Abraham isn't injured or worse. Abe insists as long as they're on mission, he's good, and off they go.