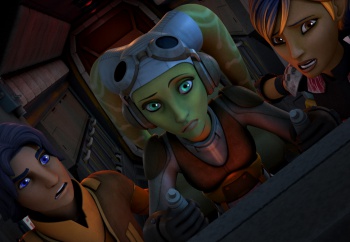 That final point creates a conflict with Hera, who is receiving Imperial intelligence from someone named "Fulcrum", but refuses to disclose his identity to the crew. From Kanan and Hera's mind, this is a precaution in case a crew member is captured by the Empire. But with Ghost facing so many botched and complicated missions, Sabine is starting to wonder whether Ghost's missions are as altruistic as she'd thought.

The concept would be an interesting one to follow up on. We've seen very few legitimate disagreements between this crew, who have shown themselves to be more destructive than the Empire on several occasions. But the question is dropped almost immediately when the alien creatures (dubbed fymocks) star attacking like Star Wars was set on LV-426. Thankfully, the creatures can be shot down individually and are driven into the shadows by sunlight, but once darkness falls they swarm out in massive numbers. That's a huge problem in this particular asteroid belt, where space rocks keep eclipsing the sun every few minutes.

We're then treated to a sequence where Sabine and Hera are basically video game characters, specifically from a survival-based horde mode inspired by Pitch Black. The pair start by setting explosives around the main entrance, and literally call out "Wave 1, Wave 2" as successfully larger numbers of fymocks emerge from the base. While Rebels has always had solid action sequences, the style of combat and nature of the aliens makes for a refreshing change of pace, especially since Ezra and Kanan can't waltz in and Jedi everything to death. (Although Ezra does try to pitch in once the Ghost arrives, but it doesn't exactly work out for him.)

As enjoyable as the fight is, it means we never really get a chance to learn more of Hera's intentions. Even before the battle begins, there's no attempt to address Sabine's concerns beyond "No seriously, just trust us," even though something is clearly going on (Hera specifically grabs a marked container that she doesn't want Sabine to be looking at, for example). I'm not expecting Kanan and Hera to be Sith all along (although now that I think of it, that sounds awesome) but if you're going to introduce these elements, it would be nice to do something with them. Instead, Hera and Sabine bond over their fymock shooting, and all is well again. Meanwhile, Fulcrum is obviously planning something behind the scenes, but whatever that is will be saved for another episode.

Bottom Line: "Out of Darkness" has some intriguing plot details and character developments, but at the end of the day? It's an excuse to watch Rebels' female cast members kick all of the ass. And that's a good thing.

Recommended: Were you looking forward to an episode about Sabine? It's finally here, and it's good, just don't expect anything especially deep.