When a slew of gang members are beaten to death, Laurel's boxing instructor Ted Grant is the top suspect.

With a solid villain to face, good pacing, and some nice character moments, Arrow seemed to have righted itself last week after a shaky start for the season. "Guilty" has all of the ingredients to be a great episode, but some painfully stiff dialogue and out of sync characterization holds it back.

Oliver and Team Arrow investigate the murder of a big group of gang members. One of the dead gang members gets strung up in Ted Grant's gym, and Oliver suspects that the boxing instructor may be responsible. Laurel, who has grown to trust Ted, is convinced he's innocent. Team Arrow's investigation reveals that the gang members' murders are suspiciously similar to the murder of a drug dealer six years ago. All of the murdered men were killed by blows from a left-handed fighter wearing bronze knuckles. Ted is left-handed, and Oliver sets himself to discovering what he's hiding.

Back at the Arrow cave, Roy finally tells someone about his disturbing dreams. He tells Felicity that he believes he may have killed Sara, and asks her to test his blood for traces of the Mirakuru serum. Felicity discovers that his blood is free of Mirakuru, but Sara's autopsy results have some irregularities that might be consistent with Roy's memory of killing Sara. Felicity says that the arrows did not appear to be shot from a normal bow, and that it is possible Roy killed her in a Mirakuru-induced rage by throwing arrows at her. Felicity may be a fantastic computer scientist, but I'm not sure I trust her forensic skills. Considering that for a moment, why hasn't the Arrow team brought in the highly trained crime scene investigator Barry Allen to consult on Sara's murder? It seems like a natural fit. I suppose Barry might be a little busy in Central City. 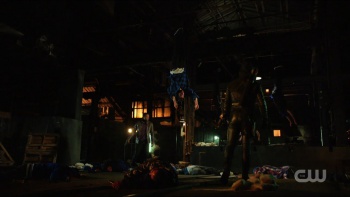 While the overall plot of finding a murderer and discovering Ted's dark past is solid, the characterization in this episode is all off. Felicity barely gets to do more than act surprised, and despite spending most of the episode with Roy, the pair of them seem to have no connection at all. Diggle is uncharacteristically antagonistic while also confusingly ignoring Oliver's bullheaded approach to dealing with Ted. Usually, Diggle is the first to call out Oliver when his anger and decisions are being driven by his feelings for Laurel instead of any hard evidence. One consolation is the impressive car stunts that feature in the big climactic fight. Even when Arrow stumbles on its characters, dialogue, or pacing, it continues to provide some of the best action on television. Roy's acrobatics even make a helpful appearance.

This episode feels like it wants to be all about Roy and Laurel, and that would have more weight if they were given a chance to express themselves instead of letting Oliver make statements about them. Oliver continues to prove that he struggles with being a mentor by not considering the needs of the people who look up to him. With all the tensions that are building within Team Arrow, Oliver is going to need to get a lot better at it to keep his team together.

Arrow airs Wednesday nights at 8/7c on The CW. You can also watch the latest episodes on The CW's website and Hulu. Big spoilers follow, including a look at Laurel's future.