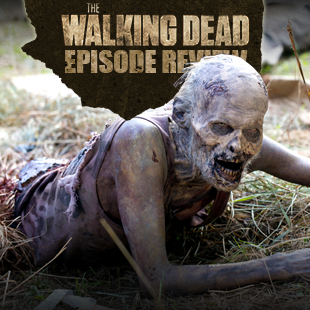 An already solid season delivers the best episode yet that somehow unites themes of surviving domestic abuse with surviving a zombie apocalypse.

The Walking Dead's original sin was, particularly during the first through third seasons, its incoherent and wholly inconsistent characterizations, coupled with the oft-mentioned tendency to force its characters to learn and relearn lessons, and make and remake stupid mistakes, simply for lack of a better idea of how to move the plot forward. One extremely unfortunate side effect of this problem was that several moments which should have conveyed a specific moral point were in fact undermined, because the writers appeared to have intended its exact opposite.

Example: When we first encountered Carol in the first season, she was the meek and terrified victim of abuse at the hands of her husband, Ed. Ed was a lazy, foul tempered asshole who refused to contribute to the community of survivors, and who brutalized Carol frequently, while their fellow survivors did nothing whatsoever to address the problem. One episode saw Shane, angry beyond belief at having been cruelly rejected by Lori*, stumble upon Ed as he's flagrantly beating Carol in front of the other women of the camp. Shane flips out, rips Ed away from Carol and beats him to within an inch of his life.

It was a powerful moment, giving viewers the thrill of seeing someone finally take action to deal, justly, I might add, with a person who endangered the safety of the community as a whole not only by refusing to participate in its defense, but in destroying harmony by terrorizing his family. It also appeared to function as a comment on the most insidious way that abusers are supported and encouraged by their communities - "it's a private matter, let's not get involved". The survivor camp was itself complicit in its own dissolution simply by giving tacit approval to Ed's abuse.

Unfortunately, the writers wanted us to think that Shane, not Ed, was that scene's real monster. It ended with all witnesses freaking out, more terrified of and angry at Shane than they ever were at Ed. Perhaps the point was simply to further emphasize how complicit and complacent people can be when confronted with abuse, but as Ed was soon bitten by a zombie and left to die, the matter was dropped from the show and never revisited. Which forced us to assume the writers had no idea they were even dealing with domestic violence themes at all. 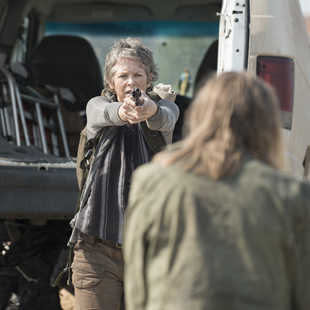 Thankfully, that sin was mitigated in a big way in "Consumed", the 6th episode of The Walking Dead season 5, a Carol-centric episode that made her personal struggle to overcome abuse front and center. It's a powerful example of how to do effective character development within a show like this, as well as a total redemption for the show's previous treatment of the issue of domestic abuse.

Framed by flashbacks to the time Carol spent wandering alone after being kicked out of the prison back in season 4, it picked up with Carol and Daryl, last seen taking off in a car after an automobile we now know came from Grady Memorial Hospital. Following the Grady ambulance to Atlanta, they're soon forced find a place to hole up for the night until they can figure out where they're headed. Carol knows a place, she says, and it turns out to be a women's shelter she spent some time in before the apocalypse. While there, she and Daryl talk about his plea to her earlier in the season that they can all start over. Carol is clearly having problems accepting that possibility, though she and Daryl admit they're both struggling with this. Carol tells Daryl that "I didn't stay," acknowledging that like many victims of abuse, she returned to her abuser.

As if to emphasize that tragedy, shortly after this they learn they're not the only people in the shelter: a woman and her young daughter, having been there when the apocalypse happened, died and turned into walkers. Carol becomes almost passive in her resignation over this, their fate the symbol of the way she sees herself prior to the end of civilization. She can't bring herself to kill the two, but Daryl, attempting in his way to help her, does the deed himself, and gives the woman and her daughter a cremation burial on the roof of the building.

Soon after, they make their way into downtown Atlanta's hotel district (home of Dragon Con, btw), then to a skybridge connecting two of the hotels, where Carol begins to gingerly talk about what happened while she was away from the group last season. She also laments that "I don't think we get to save people anymore." Daryl disagrees, and offers that the reason he said they can, they have to start over, is because "we gotta". In his way, he's trying to offer Carol a way out of the spiral of shame and regret that, just as in real life, can become its own excuse never to move forward and improve.

* I'm assuming you've all watched this show by now and know who the hell I'm talking about.