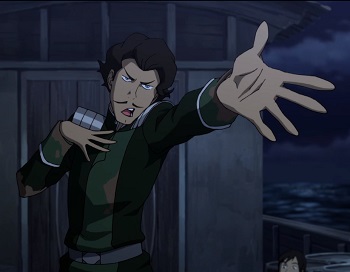 With the closing act of Legend of Korra starting next week, "Remembrances" is a reflection on the road so far. Unfortunately, this is done via a clip episode, and while nothing can get around that fact, it's still a pretty good clip episode. In fact, the last half of it is entirely irreverent, inaccurate, and hilarious.

Avatar: The Last Airbender did something similar with "The Ember Island Players" near the end of that series. For those that skipped ATLA (something you should fix), that episode took the heroes to a ridiculous stage performance of their adventures put on by members of the enemy Fire Nation. It was a unique experience, and something that "Remembrances" doesn't repeat.

"Remembrances" only adds a few minutes of new animation, but the clips themselves are narrated by Mako, Korra, and Varrick, with commentary from their respective audiences. In the case of Mako, that commentary is, at times, hilarious, while Varrick's over-the-top story is just brilliant. Interestingly, Mako's story gets the most screen time, and it's largely about his love life.

No matter how well done a clip episode is, it's still a clip episode, and it isn't something you like to see when you tune in for new episode. Co-creator Bryan Konietzko gave viewers a warning on his tumblr page, sharing that early in production for Book Four their budget was reduced by the cost of animating an episode. Rather than letting people go, they opted for a clip episode, and put effort into it even if it was something they dreaded.

"We all worked really hard to make sure at the very least it isn't crummy," Konietzko said.

"Remembrances" was almost a disappointing episode, even with the chibi heads of Mako and Prince Wu arguing over clips. Thankfully, the completely ridiculous Varrick portion made this an episode to watch, and definitely took away the sting of it all.

Maybe something light and silly is just what we need before we head into the last episodes of the series. Or as Konietzko says, "before POOP. GETS. REAL. And then the series is done."