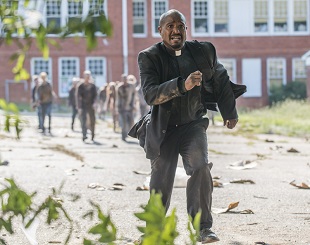 Back at Father Gabriel's church, Gabriel has wandered off to the nearby school we last saw as the base camp used by the Terminus cannibals. The scene takes particularly glee in lingering on the half-charred stump of Bob Stookey's leg, but a swarm of zombies trapped inside the school break through the doors and chase after Gabriel.

Gabriel runs back to the church, and in a moment dripping with irony begins screaming for Michonne and Carl, barricaded inside, to let him in. Unlike Gabriel, they actually try to help him, tearing off the boards and dragging him inside, with the swarm of zombies pouring in quickly after. The three (and baby Judith, strapped to Michonne's back during the ordeal) manage to escape through the hole Gabriel dug in his office floor, then trap the swarm of zombies inside the church. At that moment, Abe, Glenn, Maggie, Tara, Rosita and Eugene show up in their firetruck, help with dispatching the zombies, and learn where Rick and the others have gone. Maggie is almost overwhelmed by the news that her sister is still alive, which must surely mean the episode has a happy ending, right?

Meanwhile, at the hospital Beth is getting a much closer look at just how precarious things are, not only for the people the Grady cops have kidnapped and forced into servitude, but also for Dawn, whose grip on power is rapidly declining. Beth witnesses one of Dawn's officers berating and then beating an old man for failing to repair a hole in his uniform. After pushing the old man down, he turns his attention to Beth, eyeing her with creepy appraisal, and asks if she knows how to sew. Dawn walks in at that moment and claims Beth is needed to help her with something, the implication that she just saved Beth from being raped obvious.

Later, at the elevator shaft last seen when Beth and Noah made their escape attempt, the two have a frank conversation about the state of things, and Dawn finally reveals how she ended up in charge of the Grady group. Their previous commanding officer, her mentor, lost his shit. Dawn explains that her officers "risk their lives every time they go out there. It has to mean something." What that something is, she doesn't come out and say, but her former commander lost sight of that, and Dawn was forced to kill him. The implication seems to be that his loss of control had to do with the rape culture the Grady officers have demonstrated again and again; rightly realizing what would happen if someone else ended up in charge, she killed her commander to establish her authority. If she can't stop them from becoming a rape gang, she can at least channel it away from her and her other female officer.

Chilling stuff, but it's difficult to feel too much sympathy for her. She's losing control of the group precisely because she has allowed them to become increasingly disgusting, and at this point is only trying desperately to maintain control. Beth alludes to this, prompting Dawn to call Beth out for having killed Hanson, the officer who tried raping her a few episodes back. The implied threat is that Dawn could at any moment reveal to her officers what Beth did, at which point Beth would be at their mercy. That threat doesn't go much farther however, because the creepy cop from earlier turns out to have been spying on Beth and Dawn.

He knows he has Dawn's number and informs her he intends to tell the other cops that she covered up Beth's involvement in Hanson's death. This leads to a near-breakdown by Dawn; having finally reached her limit for tolerating all the raping, she draws her gun and forces the officer back into the room. After making the mistake of monologuing for too long and too close, the two fight. Beth joins in and she and Dawn managed to push the officer out into the elevator shaft and down to a richly deserved death. Later, Beth accuses Dawn of using her to eliminate rivals without getting her hands dirty and further, she needs to accept that the bad things she has done aren't a temporary blip in between stints of civilization, it's just how she is now. This is important, as it feeds into what happens next.

At last, we get to the prisoner exchange. Rick, Daryl, Tyrse, Sasha and Noah gingerly escort their captives in, while what remains of the Grady group do the same with Carol and Beth. Once the exchange happens, Dawn demonstrates how craven she really is by demanding that Rick and co. turn Noah over to her. She straight up talks about Noah as though he is her property, and makes it clear she will start shooting if he isn't returned to her. Noah immediately agrees in order to stave off further bloodshed, but Beth, who has clearly had enough of this bullshit, can't let it go. She coldly tells Dawn "I get it now," and stabs her in the chest with a pair of scissors.