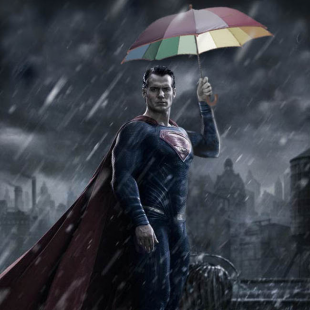 Marvel's cinematic universe is the obvious thing to mention here, grounded (morally speaking) by Captain America, perhaps the most fundamentally wholesome and optimistic movie hero since Christopher Reeve's Superman. Warner Bros and DC, for whatever reason, didn't look at how Marvel pulled that off and imagine the same was possible for Superman himself. (Instead, they have a "no jokes" mandate for DC movies. Ugh.) Guaranteed, Batman v. Superman: Dawn of Justice will likely just be "Human Batman v. Alien Batman," and that's a damn shame.

But that classic dynamic is being used perfectly with Arrow and The Flash. Without hyperbole, I believe that Grant Gustin's take on The Flash is - there's no other way to put it - the best version of Superman since Christopher Reeve in the 70s. And by pairing him with Steven Amell's Arrow, who is the Batman of this particular universe, both archetypes truly flourish for the first time in what feels like decades.

The fight between The Flash and Arrow in this episode was particularly inspired. The two bringing their respective abilities and skills to the fight, neither was able to definitively get the upper hand on the other. That's partly because only Barry Allen, affected by Bivolo's mindscrew powers, was fighting to kill. Arrow was only trying to subdue, and as such he held back his considerable kill-skill. But it's also in the way the fight emphasized what these characters mean to one another. "I still believe in you, Barry," an exhausted Arrow says just after severely wounding Barry enough to slow him down. That sums up not only the hope a character like The Flash is supposed to give to the people around him, it also demonstrates that Arrow isn't going to descend into Punisher-Meets-Bane level darkness.

It's a moment right out of something like World's Finest, and it demonstrates how the creators of these two shows have a better handle on what makes DC Comics special than anyone in Warner Bros. film division. I hope Warner Bros. is paying attention, because this is how it's done.

True, these shows aren't artistic masterpieces on par with Game of Thrones or Mad Men, but they get, intimately, the essential appeal of comic book stories, characters, and moral questions. They're also insanely fun, well shot, and thrilling in a way that suggests the creators are having as much fun as the viewers are. That's a rare, magical combination. I hope these shows go on for years, not only because I want them to build the world even more, with potential spinoffs to make me squeal, but because I want to watch these characters, and their actors, build something kind of special out of IP most people don't care about.

Fuck yeah, in other words.

Bottom Line: What would otherwise be a minor episode was elevated by how excellently Arrow and The Flash complement one another. We got the good version of Batman versus Superman we'll never see in movie theaters.

Recommendation: Watch it. Maybe watch it more than once, once the season ends.