Oliver plays directly into Harkness' hands when he tortures Klaus Markos, the man who designed the exploding boomerangs. He gets a phone, but it's a plant, which Harkness uses to locate the Arrow Cave. He attacks, critically wounding Lila, and Oliver blames himself for it. The violence and danger is new to Team Flash - most of the threats they face don't target the people they love. Caitlin, and to a lesser extent, Cisco, realize for the first time that what they are doing could be extremely dangerous. I hope that The Flash will explore some of those darker themes, but that they approach it with Barry's optimism instead of the moody darkness that Oliver does so well.

This whole crossover event is packed with comic book references. Cisco dubs Harkness "Captain Boomerang", his comic book alter-ego and an homage to the running joke of giving metahumans nicknames in The Flash. Even Captain Boomerang's five bombs gambit is a direct nod to the comic book source material. Putting multiple targets in jeopardy in order to counter the speedster is a classic tactic for villains facing The Flash. In DC: The New Frontier, Captain Cold used a similar stunt, but lied about the number of bombs, leaving The Flash chasing a nonexistent bomb (for a few moments, at least). Plus, the title of the episode, "The Brave and the Bold", is a direct reference to DC Comics' team-up title with the same name. It's been published on and off since 1955, beginning as a series where new characters could be given a try and later becoming a place for established characters to join forces. I've said it before, but Arrow continues to impress me with how well they execute these kinds of references to the comics without doing anything to alienate viewers who've never picked up an issue. 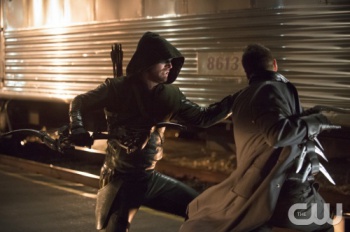 With Barry's help, Starling City is saved without Oliver needing to torture Harkness. As Oliver and The Arrow continue to slowly progress towards heroism this season, I expect we're going to see more and more of his descent into accepting violence as a necessary evil in his flashbacks. In Hong Kong, Oliver is still struggling to resist Amanda Waller's methods. I think we're going to see his resistance break in the past, while he starts to regain it in the present.

Laurel's still largely absent in this episode, showing up only briefly when Oliver and Barry meet with Quentin Lance. Laurel's development into the Black Canary will ramp up when the show returns from its winter break. Producer Andrew Kreisberg told The Hollywood Reporter last month that Laurel will be getting a lot of focus soon, saying, "Episodes 10, 11 and 12 are a three-part trilogy that are about her."

Also worth a mention is the final scene, with The Flash and Arrow fighting in the warehouse. That's a reference to Rocky III, a nice little nod to Barry's comment in the first half of the event, where he asked if they'd be training "like Rocky". I love it.

Next week, Arrow wraps up with its fall finale, "The Climb", before going on hiatus until the new year.

Bottom Line: "The Brave and the Bold" brings the heroic Flash to the darker world of Starling City, and he brightens up the place. The conclusion to the "Flash vs Arrow" two part event creates a lasting link between Team Arrow and Team Flash, and nudges Oliver just a bit further on his path from violent vigilante to inspiring hero.

Recommendation: Contrasting Oliver with Barry works perfectly, because they both take complementary paths to the same goal: doing good. If you haven't already been watching The Flash, now's the time to get caught up.