"The Brave and the Bold" brings The Flash and his team to Starling City to help The Arrow fight Captain Boomerang in the second part of the crossover event.

After teaming up with The Flash in "Flash vs Arrow" to stop Roy Bivolo, a superpowered metahuman able to manipulate people's emotions, the two night crossover special continues when Barry Allen and Team Flash come to Starling City. Caitlin Snow, a S.T.A.R. Labs bioengineer and member of Team Flash, has been working on forensic evidence from the Canary's murder, but there's a more pressing problem: the boomerang-wielding murderer that The Arrow has been tracking is now targeting Lila.

The Arrow team learns that the man killed at the end of last week's episode, Kai Wu, was an A.R.G.U.S. agent. His killer is Digger Harkness, a former member of the Suicide Squad who had been presumed dead, largely because the bomb in his skull had been activated. It was Lila's decision to terminate the squad, but Harkness survived and he's back for revenge.

Oliver insists that if Barry is going to help stop Harkness, it's going to be done Oliver's way. Very quickly, that means Barry sees Oliver's methods up close and personal - including torturing a man for information about Harkness' whereabouts. The action scenes, the fights and chases, and the little jokes as the two teams mesh are all great, but at the heart of this episode is the difference between Oliver and Barry's philosophies. Barry is a relentless optimist, always looking for the good in others. While Lila and Amanda Waller, and even Diggle reinforce Oliver's belief that extreme measures are warranted against criminals like Harkness, Barry strives for (and succeeds on) a more heroic path.

If you haven't seen "Flash vs Arrow", I highly recommend giving it a watch, or reading Ross' review of the episode. You can watch it on The CW's website and Hulu. Even if you haven't been following The Flash, you'll still be able to follow most of what happens in the first part of the crossover, and more importantly, it establishes the relationship between these two heroes, and that's the best part of this episode. 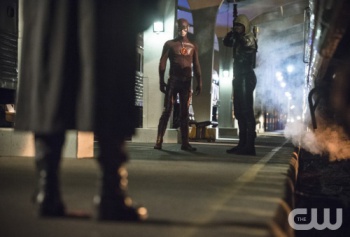 While the first half of the crossover event focused on what Barry needs to learn to remain an effective hero, the second half is all about what Oliver needs to become one. In season one The Hood was a brutal defender of Starling City. Intimidation, torture, and murder were all equal parts of his arsenal, and Oliver saw himself as a dark force of vengeance. It was only chance and necessity that convinced him to allow anyone else into his vigilante mission. In season two, he committed himself to not killing, and his most triumphant moment in that story was defeating Deathstroke and his army without having to use deadly force. Oliver's methods are still morally grey, but he's drawn a moral line in the sand over killing. This season, particularly in the flashbacks to Hong Kong, we're seeing Oliver be pushed to accept violent and immoral actions as a valid path if they save lives. In the present, Oliver is struggling with his willingness to do those same things, and continues to think of himself as broken and irredeemable. Throughout the series, he has struggled with permitting himself to connect with others, shielding himself with his vigilante identity. Sometimes, he's right, and being a vigilante does bring a lot of danger to the people he loves, but he also uses it as an excuse. Diggle will call him out when he's being an ass to others, but Barry is the first to call him out on his self-hatred. Barry pushes Oliver to keep moving towards the heroic.

Arrow airs Wednesday nights at 8/7c on The CW. You can also watch the latest episodes on The CW's website and Hulu. Spoilers (for the episode and Laurel's vigilante debut) and comic book references follows!