The fall finale of The Flash is a touching and ass-kicking Christmas episode that finally digs deep into the show's primary myth arc.

God damn I love The Flash. At this point I can't imagine how this show could possibly let me down: even if it turns in a bad episode (only the pilot barely comes close to that), it's doing so much right that I'm in deadly danger of giving it a pass because of how much I love everything else.

Fortunately, I don't have to worry about that just yet, because the latest episode - "The Man in The Yellow Suit" - was, yet again, fantastic. First and foremost, it was a great holiday episode, grounded around themes of family, friendship and reconnecting with loved ones, where interpersonal conflicts were resolved with bittersweet maturity. But just as important, it also managed in the space of 45 minutes to deliver some truly fun action, introduce (officially) another classic superhero into the Arrowverse, and give viewers a few major myth arc reveals to keep them ravenous during the show's winter break.

Anyway, The Flash. I waited until last week's crossovers between it and Arrow to begin reviewing the show, and as a result I'm betting there's a lot of catching up I could help you out with. So, before we jump into last night's episode, let's get up to speed with the show overall. Be warned, there will be spoilers discussed with reckless abandon from this point forward.

For a longer breakdown, see my review of The Flash pilot.

14 years ago, 11 year old Barry Allen witnesses the murder of his mother at the hands of a mysterious man dressed in yellow, who is surrounded by strange red and yellow lightning. The police don't believe Barry's account of the crime, and Barry's father is arrested, convicted, and sentenced to life in prison for it instead. Flash forward to present day. Barry is now a forensic scientist working for the Central City Police. Meanwhile, scientific research company S.T.A.R. Labs has built an advanced particle accelerator, the debut of which becomes a major media event. Unfortunately, upon being activated, the accelerator malfunctions, spewing dark matter into the sky above Central City, which causes a freak lightning storm that strikes hundreds of people all over the city. Barry is among the storm's victims, and spends 9 months in a coma. When he wakes up, he discovers he has the superpower set familiar to fans of the comic, but he's not the only one. The storm's other victims have also been gifted with powers, and most of these people - dubbed "Metahumans" by S.T.A.R. Labs - are content to use their new abilities for nefarious purposes. 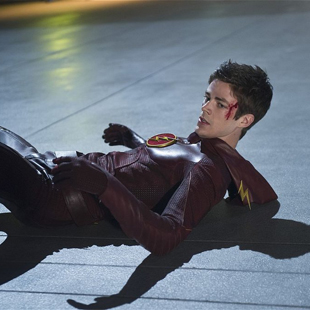 Barry Allen (Grant Gustin): See above. Think Christopher Reeve as Superman combined with Peter Parker, Barry is gradually learning to control and enhance his new powers. Already instilled with a do-gooder complex thanks to his father's imprisonment and to his being raised by Detective West, Barry teams up with what's left of the disgraced S.T.A.R. Labs team and assumes the identity of The Flash in order to stop Metahumans criminality. At first considered an urban legend, "The Flash" is gradually becoming known as a hero to the people of Central City. Ultimately, Barry intends to prove the existence of the man in yellow, and his father's innocence.

Detective Joe West (Jesse L. Martin): Created specifically for the show, Joe is Barry's surrogate father and the first person outside of S.T.A.R. Labs to learn about Barry's powers. A dedicated police officer and a devoted father both to Barry and to his daughter, Iris, he's always concerned for Barry's safety and sanity. He also quickly becomes Barry's staunchest ally as the magnitude of the threat posed by criminal metahumans becomes clear. His only condition is that Barry keep his double life a secret from Iris, in order to protect her.

Iris West (Candice Patton): Joe's Daughter, a senior year college journalism student, she's the first person to openly discuss The Flash as a real person on a blog she creates to talk about the strange events happening in Central City since the particle accelerator accident. She and Barry are best friends, which is complicated by the fact that Barry has been secretly in love with her since childhood.

Eddie Thawne (Rick Cosnett): Joe's partner on the force, he's also dating Iris. He eventually becomes convinced that The Flash might be a public menace and organizes a task force designed to bring him in. He shares a name with the comic book secret identity of Reverse Flash, The Flash's deadliest arch enemy. However, so far there is no indication that he and this show's version of Reverse Flash (obviously the culprit behind Barry's mom's murder) are the same person.

Dr. Harrison Wells (Tom Cavanagh): Also created specifically for the show, Wells is the founder and financier behind S.T.A.R. Labs. He saw his reputation and business (but not his fortune) destroyed along with the malfunctioning particle accelerator, and now leads the science arm of Team Flash, having turned the disused particle accelerator facility into an ad hoc prison for the metahumans The Flash manages to subdue. But, as revealed in the pilot, he's pursuing a secret agenda related to The Flash that appears to be connected to events 10 years in the future. Whether he is ultimately good or evil is still very much up in the air. Du-du-duuuuuuuu.

Cisco Ramon (Carlos Valdes): S.T.A.R. Labs' young engineering expert, he's responsible for creating The Flash's suit, as well as various other gadgets that help Team Flash in their hero-ing. He's also named after the civilian identity of DC Comics hero Vibe, though like Caitlin, he hasn't been shown to have powers. Yet, anyway.

Up to speed? OK! Let's get into the episode.