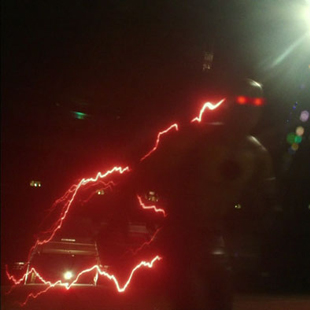 "The Man in the Yellow Suit" is, like I said, a great christmas episode. We begin at Joe's house, as Joe and Barry are enjoy a good laugh when Barry uses his powers to decorate the Christmas tree at super speed, then un-decorates it at Joe's bemused request. This moment really shows how the relationships between characters is what makes The Flash thrive, underscored by the appearance of Iris, still blissfully (and a little willfully) unaware of Barry's longstanding affection for her. It's Christmas and the family is together, but there are secrets on top of secrets and the comity and warmth is somewhat affected.

Speaking of, shortly after, Iris is invited by Eddie to move in with him. She accepts, but though Eddie is happy, he's also noticed the way Barry looks at her and asks if maybe there's something to that. Iris thinks not, but soon confronts Barry, who denies his feelings for her.

Meanwhile, Caitlin is having a rough Christmas of her own. She has a run in Ronnie, last seen living on the streets in "Flash vs. Arrow". When she approaches him, he bursts into flames and bails. Stunned, she reaches out to Cisco for help, and he creates a device capable of tracking Ronnie down. Unfortunately, Ronnie isn't interested in reunion. He rebuffs her again, with another demonstration of his bursting-into-flames powers. Convinced Ronnie has likely has turned into one of the psychotic types Flash has battled in previous episodes, she confesses to Cisco that she would rather he have died than end up locked away in S.T.A.R. Labs' supervillain supermax.

Of course, this episode wasn't just about these characters' interpersonal lives. It also finally brings the series' central mystery to the foreground. A scientific rival of S.T.A.R. Labs, Mercury Labs, is working on a device that manipulates "tachyon particles." Who shows up to steal said device? Why it's a metahuman with super speed powers in a yellow suit. Yep, Reverse Flash finally makes himself known! 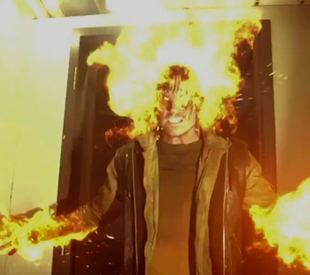 Reverse Flash murders two security guards, but fails to get the device. Barry quickly realizes who they're dealing with, and soon is confronted directly by Reverse Flash. The two have a thrilling chase all over Central City, but Reverse Flash has clearly focused more on strength training and core than Barry, and when they fight, delivers a sound ass-kicking to him. Before speeding off, Reverse Flash taunts Barry. "you're destined to lose to me," RF says, "just as your mother was destined to die by my hand."

Dr. Wells comes up with a plan to nab Reverse Flash: using the tachyon device as bait to lure him into a trap, then encase him with a force field designed by Cisco. Barry, however, is told by Joe and Dr. Wells not to be around when the trap is sprung because, so they say, he's too close to the case. Barry agrees, but deeply affected by his encounter with Reverse Flash, he returns to Iris, and this time confesses his feelings for her. However, he makes it clear that he understands her relationship with Eddie and supports her, and isn't trying to break them up. It's painful, but trust appears to be restored between them.

Back at S.T.A.R. Labs, Team Flash prepares the trap, with Joe West, along with Eddie and a couple of CCPD officers on hand to apprehend Reverse Flash once he's captured. The bait works, and Reverse Flash shows up to steal the tachyon device, only to be trapped in the force field. While Caitlin and Cisco monitor the situation from in their lab, Joe, Eddie, Dr. Wells and the officers soon learn that Reverse Flash is just toying with Team Flash. He soon reveals he can break through the force field, going immediately after Dr. Wells and proceeding to beat the snot out of him, taunting him about... something he implies Dr. Wells is fully aware of as he does so. Caitlin and Cisco notify Barry of the situation, and Barry arrives just as Reverse Flash is making his escape. The two fight once more, but like before, Reverse Flash soundly defeats Barry.

Caitlin and Cisco come outside and try to help Barry, and it appears that Reverse Flash is going to kill all three of them, when suddenly Ronnie appears. Zapping Reverse Flash with a powerful jet of fire, he manages to force Reverse Flash to retreat, though RF does manage to take the tachyon device with him. Caitlin now realizes that Ronnie isn't the damaged psycho she feared, but when she approaches him, he warns he not to look for him again. "I'm not Ronnie anymore," he says. "I'm Firestorm." With that, he bursts into flame again and this time, flies away. I'll touch on this again shortly, but to be clear, this whole sequence was incredible. 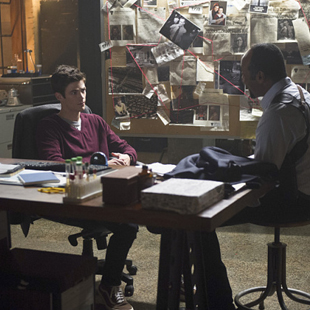 Barry is fairly crushed after Reverse Flash's escape, but Joe gives him an immensely touching pep talk, telling him how essential his optimism and bright spirit have been, for Joe as his friend and as his surrogate father. "Don't lose that light now, Bar," a teary-eyed Joe says. "The world may need The Flash, but I need my Barry Allen." The episode ends back at Joe's house as the Wests, along with Eddie, Barry, Cisco and Caitlin, are enjoying a low key Christmas Eve party, with Barry reaching out to congratulate Iris and Eddie for the way their relationship is progressing.

But there are two revelations directly resulting from the episode's events that dramatically change things. First, during a nice scene in which Dr. Wells promises Caitlin that he'll do everything he can to help Ronnie and "bring him home," Cisco realizes something important about the murder of Barry's mother. The red and yellow lightning Barry says he saw as a kid is identical, descriptively, to the visuals given off when Flash and Reverse Flash duked it out, leading Cisco to conclude that there had to have been two speedsters the night of that murder too. Yikes.

The second? In the obligatory stinger, Dr. Wells goes into his secret office and opens a hidden compartment. Inside is a yellow Reverse Flash suit, though one that looks much more worn out than that seen on this episode's villain. Dr. Wells reveals he also has the stolen tachyon device, which he attaches to the suit. Holy shit, fade to black.