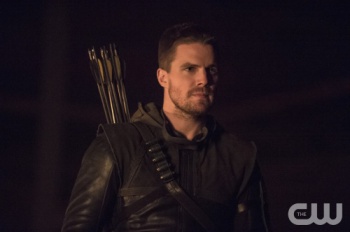 "The Climb" brings the full force of the League of Assassin to bear on the search for Sara's killer. Unimpressed with the progress that Oliver has made in his search for the murderer, Nyssa arrives in Starling City to give Oliver an ultimatum: bring Sara's killer to Ra's al Ghul in the next two days, or the League will kill 50 people a day until Oliver finds the murderer. Alongside Nyssa, and ready to make good on the ultimatum, is Oliver's former mentor, Maseo Yamashiro, now a member of the League of Assassins.

After chasing dead ends and red herrings, Team Arrow finally gets a strong lead in their investigation. The results from a DNA sample that Felicity sent to S.T.A.R. Labs are in, but the best match is Oliver himself. Certain that Malcolm Merlyn is trying to set him up, Oliver starts digging into Malcolm's whereabouts on the night of Sara's murder. As Team Arrow gets closer to solving the mystery, they also begin to uncover what Thea was really doing in Corto Maltese, and the extent of her contact with Malcolm. Thea is an excellent liar, and every time Oliver confronts her with evidence of her lies, she only gives in to the extent of what he's discovered, adding calculated new lies to deflect him from the truth. Oliver's struggle with Thea's lies is touching. He loves his sister, deeply, and he knows how much he has hurt her before due to his own lies, but now he's on the other side of it. It's painful for him to watch her lying to him, but he's still completely committed to keeping her safe.

Thea isn't the only one whose lies are coming unraveled. With the holidays nearing, Laurel is missing her sister dearly. She's not nearly as good a liar as Thea, and her weak fictions about where Sara is aren't going to stand up for long. Laurel is still so broken up about Sara's death that when asked directly by Thea, she admits that Sara is dead and buried. 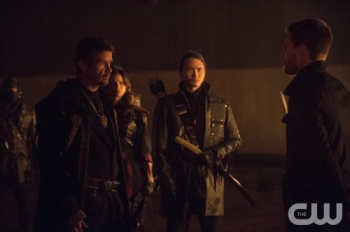 Throughout the season so far, Arrow has shown us that Oliver and his team are functioning well. Again and again we see Diggle, Roy, Oliver, and Felicity executing well-planned attacks and defending Starling City from evil. Now, with the League's ultimatum, they prove again how effective they are as a team. When they do discover who Sara's killer is, Oliver makes a choice that sends him out on his own, and with that choice, cracks are about to form in the team. Ray Palmer's A.T.O.M. exosuit is nearing completion, and whatever he has planned with it involves Felicity as well. Diggle and Lila are getting married, but the dangers of their jobs, as vigilante and A.R.G.U.S. agent, have been emphasized over and over again this season. Roy is finally starting to feel like an effective part of the team, but he barely has any life outside, having forfeited his relationship with Thea. After having become such an integrated team, the fall finale threatens to break the team apart in the second half of the season.

Arrow returns Wednesday, January 21 at 8/7c on The CW. You can watch the latest episodes on The CW's website and Hulu. Huge spoilers about the end of "The Climb" follow!