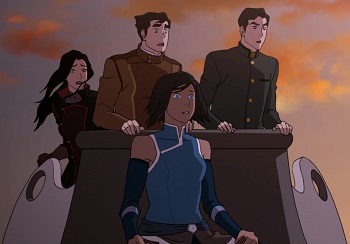 Turn off your brain and have some fun - "Kuvira's Gambit" sacrifices logic for spectacle.

Since Book One, Legend of Korra has, on occasion, allowed excitement and emotion to take priority over rationality (more than Avatar: The Last Airbender ever did). Still, the show has never asked its viewers for as much leniency as it does in "Kuvira's Gambit." It's unfortunate because there is a decent story taking place that's easy to be distracted from because disbelief can only be suspended for so long.

It's not all bad, though. If you can get past the smaller issues, "Kuvira's Gambit" is a quality episode. The threat of Kuvira's military and weaponry is quickly kicked up to high gear and the danger she presents becomes more clear and immediate. No matter what you expected of this season, there is at least one moment in this episode you won't see coming.

What won't surprise anyone are the developments of two different relationships between secondary characters, but that may be okay. While the end results were predictable, the scenes themselves are compelling thanks to stellar voice acting and animation work.

There are only a few episodes left in the series, but there's still time to catch up. Episodes of Legend of Korra: Book Four are released on Nick's website on Friday mornings, with all of the previous episodes available to view now. The first two seasons are available on Amazon, with Book Three on Vudu.

If you missed last week's review, check out our take on "Operation Beifong" -- or check out all of our Legend of Korra reviews.