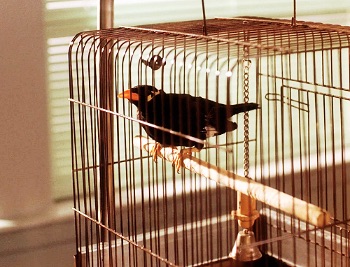 Speaking of One Eyed Jacks, Cooper and the gang are planning on infiltrating the casino/brothel themselves so that they can track down Jacques Renault, who jumped the border last episode. They need to lure him back to the states somehow so that he can be arrested. Cooper wears a tux, Truman wears a kind of lumberjack church suit, and big Ed Hurley wears a getup that makes him look like an oil baron from Texas (complete with bolo tie, later to be enhanced by a curly wig and a fake mustache).

Just as the lawmen/Bookhouse boys are getting ready to go, they hear a gunshot from the conference room and burst in to find Waldo (the myna bird) dead. Leo Johnson used his rifle to silence the bird permanently, but the tape has recorded some pretty damning audio so far, saying, "Leo, don't!" among other things...and the plot thickens quite a bit more.

Around that time, Catherine Martell discovers that she is the victim of double-cross when a perceptive insurance agent pays her a visit regarding the life insurance policy taken out on her by lover Ben Horne and rival/sister-in-law Josie Packard. The plan to burn down Packard Mill turns out to be even more twisted than she had thought, and Catherine believes they plan to kill her when the mill is set ablaze.

By the way, if Catherine Martell looks familiar to you in a "can't-quite-put-my-finger-on-it" way, Piper Laurie also played the psychotic, hyper-religious mother of Carrie back in 1976. The difference between those two roles is simply astounding.

One Eyed Jacks is the destination for many characters in the second half of the episode. Cooper and the Bookhouse Boys are going there to lure Jacques Renault back into town, Audrey is going there to follow her lead from the department store about Laura, and Ben, her father, is going there to show it off to the investment group from Iceland.

This is the point in the season when many different storylines are coming close to paying off, either in success or disaster. The pace is almost frantic.

As the episode nears the end, Donna, James, and Maddy embark on their plan to lure Dr. Jacobi out of his house so that they can sneak in and find the last entry of Laura's audio diary. Maddy calls Dr. Jacobi, pretending to be Laura. He is immediately suspicious, and so she "proves" who she is by telling him to look outside his door. There he finds a VHS waiting for him, and when he plays it, He sees a girl that looks just like Laura holding a copy of the current newspaper (but it was Maddy in a blonde wig). Maddy tells Dr. Jacobi to meet her at an intersection roughly ten minutes away from his place, and he leaves, but he knows something isn't right. He sees a gazebo (which is close to his house) in the video, and goes to that spot instead. Their plan is the most red-flag waving, suspicious and obvious farce that they could have done, but it kind of works. Go figure.

In the last minute (which always has at least one twist or turn in this series) Maddy is being watched by someone who may be the killer, and Bobby Briggs moves in out of nowhere to settle his score with James Hurley by planting some cocaine in the gas tank of James' bike. And on that note, the credits roll.

Bottom Line: This episode builds very well on the tension, intrigue, and dynamic storytelling introduced so far in the series.

Recommendation: At this point, the series just gets better and better with each episode.