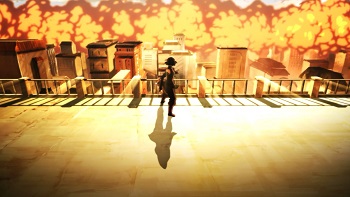 The extended Team Avatar (now including a bunch of Airbenders and almost all the Beifongs) fails after every attempt to take down the colossus. Things steadily escalate from dropping paint on the windows to lavabending under the feet to dropping buildings on it. Each plan seems like it might work, but Kuvira's machine shrugs off every attempt. The team only comes up with a successful plan when Asami's sad dad arrives with a plan to help the team infiltrate the machine. Of course, he dies in the process, but everyone saw that coming, right?

There are some technical issues we could pick at regarding the machine - for instance, the heroes travel through its limbs while it moves, yet everything looks motionless from their perspective. Overall though, every moment of the fight against Kuvira and her weapon is exciting.

The show never really slows down as the team works to stop her. They dodge blasts from the massive gun and buildings explode beautifully in the background (once again, great animation and sound work). Once inside the machine, the battles are smaller, but still high risk. Mako has a dramatic moment which actually serves as one of his best scenes in the series and Korra's fight with Kuvira is stunning.

Unlike most previous finales, the most prominent use of the Avatar State is defensive, with Korra protecting herself and Kuvira from explosion caused by Kuvira using the weapon (powered by spirit energy) in the Republic City spirit wilds. It's a deviation from the standard formula of getting the hero to go Super Saiyan to stop the bad guy, and given Korra's change over the series, it's appropriate that her final moment of action is protecting someone. The explosion tears through reality, creating a new portal to the spirit world in the ruins of Republic City.

Kuvira has been a fun antagonist to watch, but she never really developed directly on screen as much as she could have. In the end she has her little outburst about not having a real family and just trying to protect the world, but the best moment of their final verbal confrontation is the Korra's recognition of how similar they are. The result of this conversation is touching: Korra's final foe willingly surrenders. The Korra from Book One may have never gotten to a point where surrender seemed like an option.