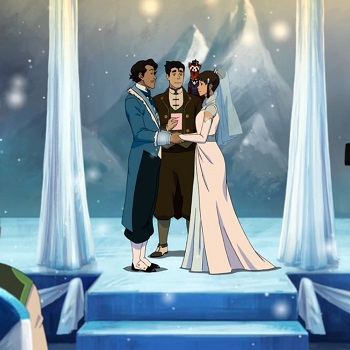 Surprising no one after their reunion last week, Varrick proposed to Zhu Li, and the episode ends with their wedding (apparently Bolin can officiate weddings?). While the direction they took isn't surprising, the entire subplot is flavored with Varrick's personality, making it far more entertaining that it would be with any other characters. Although, if one more person said a variation of, "Do the thing," the joke would officially be dead.

Previous seasons of ATLA and LoK have had the benefit of being named after whatever element (or theme, in the case of "Change") dominated the story. The problem with Book Four's title, "Balance," is both series have been about balance. While the concept is definitely explored throughout this season, it isn't really done much more than in the past.

There are areas to explore on the topic though, such as Korra's internal struggle for control and Kuvira's quest to control the Earth Empire. Similarly, Korra's journey is through all the spiritual hot spots (spirit swamp, spirit wilds, spirit world) while Kuvira builds an overpowering force from technological advancement. There's also something to be said for the modernized Republic City being nearly destroyed as a result of new weapons and a new spirit portal appearing in the city, bring the spirits back to the world.

Bottom Line: A fantastic end to everything that has happened in Book Four, but it also works as a finale to the series. It's sad to see the world of Avatar go, but the last two episodes are beautiful and exciting. And a huge shout out to the showrunners for putting Korra and Asami together romantically. It's a big step for media and brings much needed representation to children's television.

Recommendation: The Legend of Korra isn't Avatar: The Last Airbender, and it doesn't need to be. Korra is its own, wonderful series with appeal to diverse audiences thanks to its fun characters, exciting action, and gorgeous animations. Go check it out.