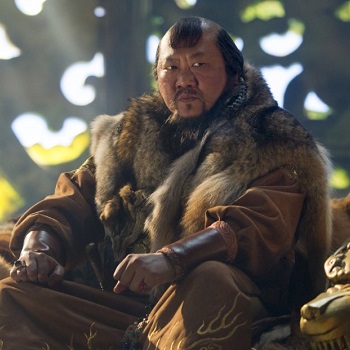 Marco Polo fails to be Game of Thrones, but improves as it finds itself.

The newest Netflix original series, Marco Polo is loosely based on the early life of the historical traveler and merchant. Set in Asia in the late 13th century, a young Marco Polo is offered by his father to the Mongol ruler, Kublai Khan, in exchange for the freedom to trade along the Silk Road. Over the course of the first season, Polo adapts to Mongolian and Chinese cultures while politics and deception play out around him.

Marco Polo is a disappointment, especially when compared to other recent Netflix series like House of Cards and Orange Is the New Black. The show doesn't really do anything exceptional outside of a stellar soundtrack and a consistently brilliant performance by Benedict Wong as Kublai Khan. Otherwise the show is simply acceptable, but is held back by an uninteresting lead and delusions of Game of Thrones.

Luckily, about halfway through its inaugural season, Marco Polo stops trying to be something it isn't and starts letting its (mostly) intriguing cast of characters carry the show. It helps that the title character doesn't seem to take up as much screen time, because nearly every other character is more interesting and has a bigger impact on the story. Unfortunately, it's unlikely viewers will make it to the much better second half.

Netflix has seen success with most of its original series, thanks in part to the company's wealth of data on its users and insight into what they watch and why. This information informed the company's decision to pick up David Fincher's House of Cards, but Marco Polo seems conceptualized on getting in on the Game of Thrones audience. However, the show fails to capture the spirit of what makes Game of Thrones work and fails to establish its own voice until the later episodes.

The streaming giant spent $90 million producing the first season's ten episodes, which is double the cost per episode the company put into its other drama series. Given Marco Polo's lackluster first season, there may likely not be a second, which is disappointing because by the end, I was rather invested in many of the characters. Just not Marco Polo himself.