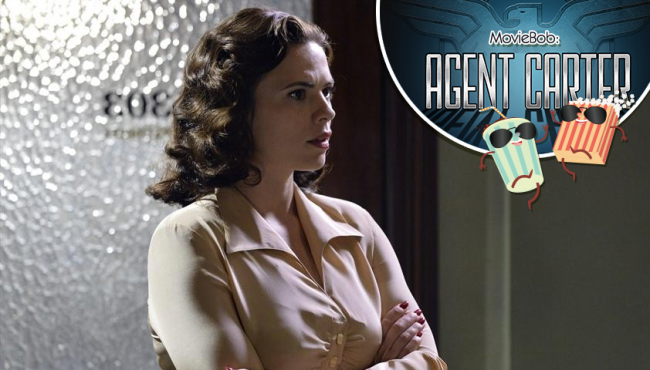 "Time and Tide" isn't any less about Peggy Carter throwing punches, but it does take a break from fight scenes to build up the world it inhabits.

The third episode (after last week's two-parter debut) of Agent Carter dials it back - on the surface, anyway - on its meta-theme of the hard luck of women living in an unwelcoming post-WWII U.S. to get busy on the world-building. As a result, "Time and Tide" feels just slightly less revolutionary and more like an above-average episode of Agents of S.H.I.E.L.D., inasmuch as it's a solid bit of character work buffed up by a great action sequence and a focus on the show's intriguing, still-emerging mythos.

For those just joining: Onetime ally/love-interest of Captain America Agent Peggy Carter (Hayley Atwell), chafing at being treated like a glorified secretary in the new postwar "boy's club" environment of the Strategic Scientific Reserve, has been covertly tasked by framed (?) fugitive Howard Stark and his deceptively-resourceful butler Jarvis to help recover a cache of super-weapons stolen from his private vault. The culprit appears to be a shadowy entity (organization?) thus far referred to only as "Leviathan," whose foot-soldiers take their orders from radio-controlled typewriters and have had their vocal cords surgically removed. Peggy's chauvinist colleagues at the SSR are also on the case, but they're working from the premise that Stark is guilty - which he might well be, as we've already seen the secretive Jarvis talking to him on the phone with words implying that they're keeping something important from Carter.

Miss last night's episode? You can catch it online on Hulu or buy it digitally on Amazon. If you missed last week's episode, you can also catch up with our review of the premiere. Now, on with the review - spoilers below!

The main bit of new data communicated this week involves the voiceless "Leviathan" thugs themselves, most (all?) of whom seem to have belonged to the same military unit during the war - a unit that (wait for it...) was supposedly wiped-out and presumed dead. Wartime secrets are also haunting Jarvis, who we learn is an ex-soldier indebted to Stark for helping him out of a treason charge he earned for forging a signature to help his (still unseen) Jewish wife escape the Nazis in Budapest. There's also a curveball: Carter/The SSR actually manage to recover what seems to be most of Stark's "bad babies"... only for a new mystery-menace (a professional hitman) to emerge and give us our first major character death.

The highlight, unquestionably, is a knock-down-drag-out fight between Peggy and a burly henchman guarding the stolen weapons. Movie-quality fight scenes are Agent Carter's surprising secret weapon so far, and this one was impressive. Atwell (and, one assumes, a stuntwoman or two) has a great energy for fisticuffs and a stature that suggests her onscreen prowess isn't too far removed from reality, and the staging was perfect - just two combatants you could absolutely believe were focused on beating each other to death. The surprising ferocity compliments the series' commitment to a realistic (for a sci-fi/spy series set in the same universe as Thor, anyway...) portrait of Carter as a woman of her time. We're used to seeing "tough gals" of TV dish out beatings, but it's jarring to also see her have to take one in the same scene. By that same token, I can see some folks having a problem with Jarvis having to talk Peggy out of trying to take her due credit for finding the weapons (she momentarily entertains the notion that this will prove her worth to her male colleagues, he has to remind her that they'll just find a way to use it against her) but I found it to be a nice, humanizing moment.