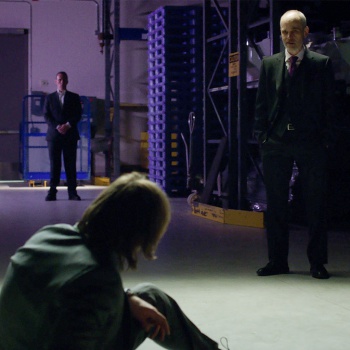 When Cole finds Goines, he's supposed to kill him -- which will theoretically prevent the virus outbreak and remove Cole from existence, as the terrible future in which he was sent back in time would never have existed. If you think that sounds way too straightforward, you'd be right. After shooting Goines, Cole doesn't simply blink out of existence (though he does spend a moment shouting at Goines' corpse as though it's at fault). When he winds up back in the future, everything's exactly the same -- the scientists think he's failed his mission, but he insists he did kill Goines and there must be another culprit.

The time travel mechanics throughout make for good watching. Though there are some definite paradoxes set up, they're used sparingly enough that it doesn't feel like it's too twisted to ever make any sense (a trap that Doctor Who sometimes falls into) -- instead, you want to keep watching in hopes you'll figure out what's actually going on. Cole himself is said to "splinter" between times, vanishing in one and immediately reappearing in another, but he doesn't seem to have control over the ability, which means he appears and disappears as is convenient to the plot. Still, the time travel element adds tension rather than bogging the show down with mechanics. 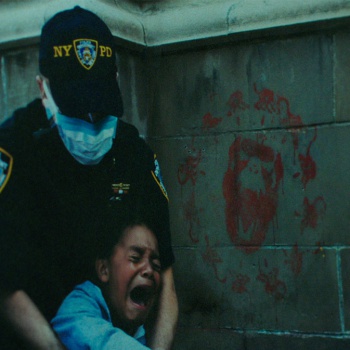 So just who -- or what -- is the Army of the 12 Monkeys? In the movie it turned out to be an animal rights organization that had nothing at all to do with the outbreak... so chasing them down may be a false flag for Cole. But since the series isn't tying itself to the movie, things could work out completely differently. The original 12 Monkeys was compelling because you didn't know what would happen next, but it presented a compelling mystery that made you want to find out. On television, we simply don't know how this is going to pan out, but the story and the presentation are still compelling enough that we want to watch and find out, even as it retreads over old material.

After Goines' death, his wealth, and perhaps his technology and his company, passes on to his daughter Jennifer (Emily Hampshire) -- a genderswap from the film, in which it was a son, Jeffrey, played by Brad Pitt. Jennifer is shown, presumably, in a mental hospital, in which she's drawing the 12 Monkeys logo on the walls. Does she -- or someone else -- continue her father's work? Right now this series is more questions than answers... but the questions are compelling enough that we're going to tune in next week to try to find the answers.

Bottom Line: The premiere of 12 Monkeys manages to carefully walk the fine line of science fiction, being both believable enough to become invested while also making use of the fantastic elements the genre is famous for. With great visuals, solid acting (though without a particularly well-known cast), and some compelling mysteries, we're already checking our watches to see if it's time for next week's episode.

Recommendation: If you're a fan of science fiction in general or time travel in particular -- or you're just missing Doctor Who in the off-season -- 12 Monkeys provides plenty of time travel paradoxes and twisty plots to enjoy. Though the season could fail to deliver on the promise of this first episode, so far it's well worth watching.