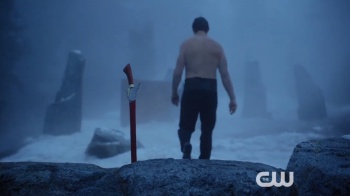 First, let me say how fantastic Emily Bett Rickards has been this season as Felicity Smoak. As the hopeful, emotional center of Team Arrow she keeps Oliver, Ray, and John from giving in to the dark pit of despair that their vigilante careers circle around. Now that's she's losing hope of Oliver's return, it's breaking her heart, and the most powerful emotional scenes in "Left Behind" all came from her. Ray can brood, and John can smolder, but Felicity bleeds. Malcolm seems disappointed that Ra's ran Oliver through, obviously hoping to stop the League from hunting him down, but I'm not convinced that Malcolm's meddling isn't a Xanatos Gambit meant to tear apart Team Arrow. He certainly seems eager to convince Felicity, Roy, and John that Oliver is dead.

In addition to all that emotion, Arrow can be counted on to deliver some incredible action scenes, and "Left Behind" is no different. The opening car chase, featuring John Diggle in the Arrow costume, and the later extended firefight with Brick's men were exciting and daring and finally gave Roy a chance to use his parkour skills effectively. Despite all that, my favorite action moment of this episode has to go to John Diggle and his reaction to Malcolm Merlyn appearing in the Arrow Cave. You tell John Diggle to put down his gun? He draws a second gun. So smooth. 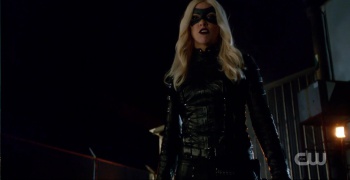 "Those Left Behind" is also our introduction to Laurel as Black Canary. The CW released teaser photos of Laurel's new vigilante look back in November, but the winter premiere is the first time we've seen her in action. Wielding her sister's weapons, including the sonic scream device and metal staff, she delivers some vigilante justice to Brick's men who she couldn't nail down in the courtroom. The big new villain, who seems rather impervious to damage, is Danny "Brick" Brickwell. Brick is an established comic book villain whose invulnerability comes from being a metahuman, like Barry Allen and his enemies on The Flash. Executive Producer Marc Guggenheim spoke about Brick, revealing that the villain's plans to take over The Glades will be part of a trilogy of episodes. (As an aside, really? The Glades again? Are there no other neighborhoods in Starling City that attract a criminal element, or is there just some sort of underground seedy version of FourSquare where everyone is competing to be king of The Glades?). Producer Andrew Kreisberg previously told The Hollywood Reporter that episodes 10, 11, and 12 would be a trilogy focusing on Laurel, so it's likely that this is meant to be a sort of crucible for the new Black Canary. With Laurel donning her sister's costume and smacking down some of Brickwell's enforcers, she has committed to operating fully outside the law as a vigilante. Personally, I don't think we'll see much of Oliver until this trilogy resolves. The Arrow Team needs space to grow stronger in his absence, and to begin to include Laurel as a vigilante. It's a possibility that Ray Palmer may join the team as The Atom, but I'd bet that his foray into superheroism won't be until later in the season.

Laurel doesn't get to take the spotlight for very long, however. Overshadowing her appearance is the end-of-episode revelation of exactly who dragged Oliver's dead body in out of the cold: Maseo Yamashiro. As Oliver takes a ragged new breath, we see that it's Tatsu Yamashiro who is responsible for bringing him back to life. Well, that ends my Malcolm-Merlyn-drags-Oliver-to-the-Lazarus-Pit theory. Still, I think we're looking at something near-mystical here. Oliver's flashbacks have hinted that Tatsu has many unknown skills. We've seen her teach meditation for memory retrieval, and viciously fight off Triad gang members with a katana, but her history isn't clear, and neither is what's happened to her since we last saw her in the past. Sometime after Tatsu was kidnapped by Chen Na Wei, Maseo joined the League of Assassins. What happened between the two of them, and why she's appearing now to help Oliver, is still a mystery, and it's got me excited for what's coming next.

Bottom Line: While I'm a little disappointed that Arrow didn't leave us in the dark about Oliver's fate for very long, this is a solidly fun episode with great action and emotional depth.

Recommendation: Things are starting to ramp up on Arrow, and fans of Laurel or the Birds of Prey will have lots to talk about in the coming weeks, starting with "Those Left Behind."