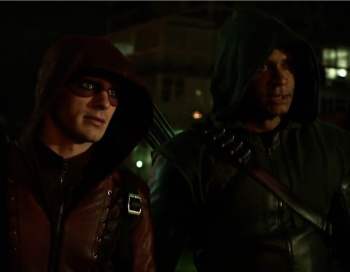 With Oliver's fate unknown, Team Arrow struggles to stay together in "Those Left Behind," Arrow's winter premiere.

Arrow is back, and Felicity, John, and Roy are keeping the Arrow Cave warm while waiting for any word from Oliver. Crime in Starling City doesn't stop just because Oliver Queen isn't in town, and the team is on the trail of a new criminal boss. Danny "Brick" Brickwell, an imposing and unrelenting underworld tough guy, is up to something shady. He was about to face trial, but all of the witnesses met a sudden and unfortunate demise. The team starts looking into Brick after one of his men shoots a cop. Trying to track down Brick and his gang helps keep the team moving forward, but the question of Oliver's fate continues to gnaw at them.

"Those Left Behind" is all about how Arrow Team handles the crushing unknown of Oliver's absence. Worry, fear, guilt, and grief accompany Roy, John, and Felicity as they face the mundane reality that life goes on. Roy, as Arsenal, finally gets a chance to really show off his fighting skills. His parkour acrobatics are presented as effective and, honestly, bad-ass, a welcome change from being limited to a cool flourish beside Oliver or played for laughs. Still, he's obviously uncomfortable as the lead masked vigilante. John dons the green hood for a brief (but delightful) moment, but it's clearly not a fit. John couldn't become The Arrow any more than Roy could take over for Felicity. Each member of Team Arrow has their own role, but without Oliver as a focal point things get shaky, and then start to fall apart.

Oliver's absence also has an effect on Malcolm Merlyn and Thea Queen. Malcolm's plotting is what sent Oliver to face Ra's Al Ghul, and he's just as impatient as Team Arrow when it comes to knowing the outcome of their duel. The League of Assassins wants Merlyn dead, and Oliver was the only thing keeping Merlyn safe in Starling City. Sparring with Thea, Malcolm tells her, "When your opponent is the mountain, you must be the sea. When he is the sea, you must be the mountain." It's good advice, and something that Oliver could have used. Malcolm manipulated him into facing Ra's Al Ghul, and then he went to face the League on their own terms, mountain to mountain, ocean to ocean. A hooded someone seems to be watching over Oliver, but it may be some time until Starling City learns his fate.

Arrow airs Wednesday nights at 8/7c on The CW. You can also watch the latest episodes on The CW's website and Hulu. Read on for speculation about Oliver's fate and Merlyn's plans, but be warned: huge spoilers follow for both this episode and the fall finale.