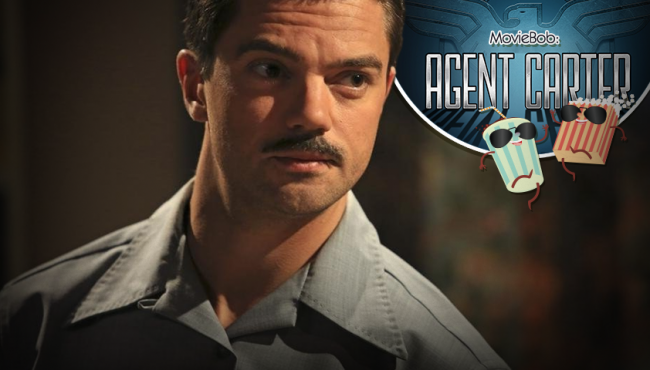 "The Blitzkrieg Button" sees Agent Carter's story really start to pick up steam while laying the groundwork for some big plot points down the line.

Tonally, Agent Carter has thus far been about exactly one thing: Misdirection. You think the story is about X? It's actually about Y. You think X is dangerous? Actually, Y is worse. You think post-WWII America was a vibrant dreamscape? Well, we're focused on the people for whom it was anything but. You think Peggy's misogynist fellow Agents are going to be easily fooled, too? Well, they're actually frustratingly good at their jobs.

Missed last night's episode? You can catch it online on Hulu or buy it digitally on Amazon. You can also catch up with our review of the premiere. Now, on with the review - spoilers below!

Case in point: One of the four concurrent storylines in this fourth Agent Carter adventure involves Enver Gjokaj's Agent Sousa (the sad-sack one-legged vet with a "nice-guy" hangup on Peggy) opening up to a homeless fellow vet whom he believes is a witness to the shenanigans on the boat from the previous episode. After hours of failing to pry the information out emotionally, he finds himself upstaged by... designated asshole Agent Thompson (Chad Michael Murray), who gets the info out instantly by offering the bum a sandwich and a beer. If you've been paying attention thus far, Thompson coming out ahead of the innately sympathetic Sousa is damn near inevitable given how the series likes to jerk around expectations, but it's a clever moment regardless.

Thompson spends the episode as the de-facto boss of the SSR because the chief (Shea Whigham) is in Europe questioning a Nazi about that mysterious "battle" the supposed-to-be-dead Leviathan henchmen supposedely hailed from. As it turns out, there was no "battle" - the Germans got there and found a whole army of Russian soldiers already dead, seemingly ripped limb-from-limb. Uh-oh. We're ultimately informed that whatever happened there may tie back to a wartime visit by Howard Stark, whom the SSR is still hunting as a fugitive...

...except for Peggy Carter, who's been helping him track down his stolen weapons technology and (as the episode-proper opens) has helped him slip back into the country - not to visit or to clear his name, but because he wants her to liberate one of his seized experiments from her HQ. He says it's a sort of pre-digital EMP-bomb, but she knows not to trust him: It's a containment vessel, holding a vial of Captain America's Super Soldier Serum-infused blood, which Stark believes holds the key to miracle cures and more.

Peggy, angry at being lied to, opts to keep the blood to herself; which she'd probably reconsider if she knew that the creepy criminal who helped Stark get back to America, Mr. Mink, is tracking them both down. Mink has a pretty distinctive look and a cool signature weapon (a rotor-barreled automatic-pistol), but he sticks out just enough to make him a target for further misdirection. I won't spoil it here, but, well... like I said last time, try to look surprised.

Overall, this was a good one - maybe a glimpse at what the concept might look like if it got a full-season order for some more episodic/procedural stories. A surprising highlight continues to be the casual banter between Peggy and the other women at The Griffith Hotel; we're so used to seeing women of this era either as doormats or heroic exceptions (i.e. Peggy herself) that it's refreshing just to see them talk about amusing mundanities like their various methods for sneaking food back to their rooms. But the standout "important" moment was unquestionably the brief exchange wherein Carter realizes that in many ways a chauvinist pig like Thompson actually treats her more honestly than the men who claim to be on her side.