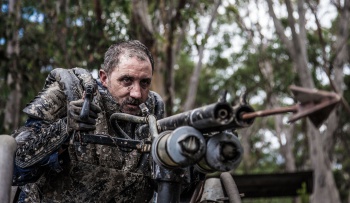 While many of the common genre tropes are included, Wyrmwood has some unique takes on zombie biology - which form a central plot point of the story - and throws in a lot more Mad Max-style post-apoc vibes, which account for much of what leans this movie more towards fun action than horror. Further, an additional supernatural element keeps the film fresh - Brooke develops the ability to telepathically control zombies. It may sound very Resident Evil, and perhaps the root of the idea can be found there, but Wyrmwood doesn't turn Brooke into an all-powerful superhuman who will clearly overcome any challenge - she retains the vulnerability you need in a horror movie character that could die at any moment.

Wyrmwood progresses at a fast pace, moving from scene to scene and never lingering in one place long enough for viewers to start questioning the movie logic. Between scenes of Barry's struggle to find his sister, we see the captured Brooke experimented on by a mad scientist who is clearly trying to get his Ph.D. in Zombiology. These segments carry an entirely different tone and are arguably the most frightening and atmospheric, leaving me genuinely squirming in my seat as Dr. Nutcase approaches Brooke's face with a drill. Berryn Schwerdt is the standout actor of Wyrmwood and his portrayal of the scientist is perfect; he flawlessly delivers on a scene clearly inspired by Reservoir Dogs as he dances to upbeat music while prepping his horrific apparatus. The contrast created between the quirky disco dancing and the grimy, blood-stained, zombie-filled test chamber ratchets up the tension of the upcoming "experiments," and honestly, this part alone is reason to watch Wyrmwood. It's been a long time since I found myself at once horrified and grinning in entertainment. 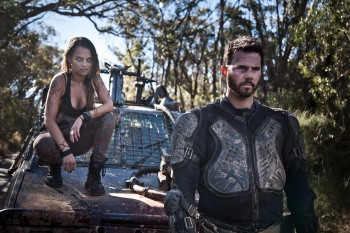 These are the moments that make Wyrmwood, and they serve as the tent poles that hold the movie together. Narrative flow is forsaken in favor of carrying the audience from one of these tent poles to the next, evoking enough entertainment value to sate the viewer until the next one comes along. This structure falls apart toward the end, however, as the final stretch of the movie moves in a direction incongruent from the plot thus far. The final climactic sequences lack the intended gravitas - there simply wasn't sufficient dramatic build-up for them, so the confrontation falls flat. Still, while the ending was a bit of a letdown, Wyrmwood as a whole is entertaining enough to make up for it.

Bottom line: Don't expect an Oscar-worthy film for the ages, but you can count on this being a cut above the typical zombie-crap we tend to see nowadays. For an indie film, it's a standout, and while some of the creature makeup was sometimes visible, the strength of the cinematography and even the musical score elevate the overall quality of the movie enough to almost put it on par with Hollywood.

Recommendation: Grab a bag of popcorn and your buddies who enjoyed Shaun of the Dead, and settle in for an entertaining evening with Wyrmwood.