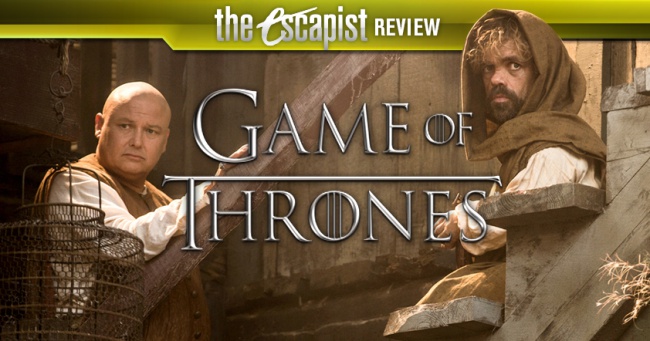 HBO's Game of Thrones Season 5 is here! The Escapist considers where Westeros stands and where its people are headed.

Remember when Game of Thrones arriving on television felt like a miracle? When a fantasy series critics compared to The Lord of the Rings wasn't just adapted, but adapted faithfully - with all the political intrigue, tragic character deaths, and slow-burning supernatural plotlines that entailed? Even in a decade where television audiences want something new it was a huge gamble - and it paid off fantastically. Game of Thrones is now the most-watched show on television, surpassing even HBO's own The Sopranos in terms of viewership and mass appeal.

But Game of Thrones approaches its biggest challenge yet: Introducing plotlines the books haven't even touched yet. Sansa Stark is completely caught up with A Song of Ice and Fire's timeline after Season 4 - which means those images where she's in Winterfell might surprise long-time fans. Meanwhile, Season 5 will conclude every major story arc from A Feast for Crows and A Dance With Dragons, setting the stage for tales the books won't cover until next year (at best).

Will that make a difference to the quality of the show? Probably not - Game of Thrones earned its audience through great storytelling, rock-solid performances, and fantastic production quality. Even if Game of Thrones ends before the novels, it will still be enthralling television. But it does mean we're entering unfamiliar territory, which at best absolutely changes the tone of watercooler discussions between novel and TV show fans. For once, everyone will be on the same playing field and equally shocked at Red Wedding-scaled plot twists.

For what it's worth, HBO is working from George RR Martin's series outline, so the end results will be mostly faithful to his vision. But it also doesn't need to be - HBO is increasingly willing to explore new directions for the story. Season 4's love-hate friendship between Sandor Clegane and Arya Stark was a great example - as was their arrival at the Vale. Jojen's fate beyond the wall was completely unexpected, yet highly appropriate. The brutal combat between Brienne of Tarth and the Hound was pure fan fiction brought to life. HBO went beyond amalgamating secondary characters for the sake of convenience - and for the most part it works well.

Meanwhile, material lifted directly from the books is as riveting as ever. King Joffrey literally getting his just deserts. Tyrion's righteous anger during his trial. Theon Greyjoy's continued humiliation as Reek. And Gregor Clegane.... my God, what more could be said about that? But perhaps the most exciting moment for me personally was "The Watchers on the Wall" - an entire episode where the Night's Watch took part in the grandest battle of the show's history. Seeing this gorgeous rendition of battered men facing not just wildings but giants was well worth four seasons of preparation - not to mention later IMAX screenings.

Now remember that it's not even winter yet - that season is still coming, bringing with it new threats and dangers the likes of which we can only imagine. But right now we have Season 5, where Tyrion and Varys are on the run, Jamie and Cersei mourn their father, Arya escapes Westeros, Daenerys feels the absence of her dragons, and Stannis protects the Wall. Where will everyone go from here?