The good news is that, for the most part, Batman Vs. Robin handles this balance fairly well. Each individual story element is well-crafted, engaging, and contributes to the overall plot. Even when Robin acts like a whiny kid, the tension with Batman is believable - Bruce is no more an ideal parent than Damian is a dutiful child. The mash-up approach also lets Batman Vs. Robin take directions that aren't possible with a straightforward adaptation. Why wouldn't Damian have been contacted by the Owls during that story arc? Why wouldn't the Court approach Bruce Wayne to bring him into their ranks? Even the apocalyptic Damian Wayne Batman is a great diversion, even if it's completely out of left-field from the main story.

The bad news is that while these elements are good, there are so many that threaten to overwhelm a balanced narrative. Batman Vs. Robin needed a two-hour runtime to flesh everything out, but as it stands amazing details keep slipping through the cracks. A great example are the Talons, undead assassins who serve the Court's bidding. These are among the deadliest and most powerful modern Batman villains - they instantly reset broken bones, bleed dust instead of liquid, and are functionally immortal. But the film's pacing throws Talons at Batman so quickly and without context that the audience could miss these details - when the film lets us spot them at all.

Thankfully, packing too many good moments into a single movie won't stop you from enjoying it. You'll see Batman barely hold his own against multiple Talons, watch Robin stalk a broken Dollmaker, and feel catharsis when the true villain violently reveals himself to the Court. All things considered, Batman Vs. Robin is a well-designed spectacle - even when it threatens to overwhelm you, there's still something you'll enjoy about it.

What's problematic, however, is Batman Vs. Robin's insistence on "maturity". To be clear, I'm not talking about violence - this is Batman, so unlike Justice League: Throne of Atlantis DC Entertainment can get away with some blood and gore. Even when the violence does get over-the-top - like the Talon stabbing someone with spiked boots - it mostly fits the story being told. 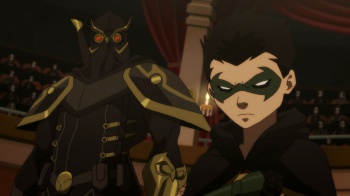 No, it's the other "gritty and realistic" hero tropes that don't work at all. Like how Bruce Wayne's girlfriend awkwardly references sex in casual conversation. Or how Batman takes a badass line from the comics ("Get out of my cave") and unnecessarily tacks on "son of a bitch". Really, DC? Why not throw in "I'm the Goddamn Batman" while we're at it? How can you not accurately represent a ten-year old in one scene, but write like one the next?

There's a reason why those classic DCAU cartoons are so beloved, and it's not because they were family-friendly. It's because they told complex stories - even mature ones - that resonated with all audiences without talking down to younger ones. Now I'm convinced the New DCAU has a checklist for hitting a PG-13 rating, but doesn't actually care about how that list fits with the story. It's certainly not impossible to do - Batman: Assault on Arkham proved that. But for Rao's sake, if you're putting swears and partial nudity in your cartoon, have it mean something. Because the other kind of maturity never looked good on Batman.

It's just a shame, because the New DCAU really is finding its groove - Batman Vs. Robin is my favorite movie from this continuity so far. Here's hoping it goes that step farther to be something fans can truly embrace.

Bottom Line: Batman Vs. Robin pulls off the seemingly impossible feat of adapting several comic storylines into a single film - one that's fun to watch to boot. Its only disappointments are it's not well-paced enough to let the great content sink in, and it plays at maturity with partial nudity and curse words. But even with those flaws, it's the best of the New DCAU to date.

Recommendation: The New DCAU still needs work, but this is the point where it's finally showing potential. If that interests you, check it out.