Unfriended brings us an energetic and scary teen slasher movie that's over in what feels like the blink of an eye.

Another thing to appreciate is the film's sense of humor. Even in its darkest moments - and it gets dark - there are still some funny lines and situations. Surprisingly, this doesn't ruin the film's ability to make you anticipate its next reveal or murder. That takes a lot of skill to pull off, but director Levan Gabriadze pulls it off without much trouble.

Part of the reason Unfriended is so successful is that this is a movie that "gets" teenagers - both in mannerisms and in the way they talk - and as a result feels authentic. It also helps that real programs and a real operating system were used; there's nothing fake that was made up for the film. The teenagers also aren't stupid like they often are in these sorts of movies. They try seemingly everything to get out of this situation, although it becomes clear to us before them that there's nothing they'll be able to do. Cyberbullying is an irredeemable crime. 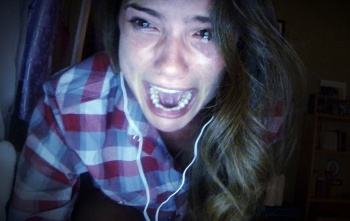 You're not likely to recognize many of the actors; you'll be lucky if you recognize one of them. The lead - if only because the film happens from her computer screen - is Blaire (Shelley Hennig). Her boyfriend is Mitch (Moses Storm), and they're friends with Jess (Renee Olstead), Adam (Will Peltz), Ken (Jacob Wysocki) and Val (Courtney Halverson). Recognize any names? Honestly, I didn't, but that didn't stop me from being impressed. The acting is solid from start to finish from all the participants, even though they don't ever get to directly interact with one another. That must've been an interesting filming process.

In a 30-day period, we have been given two solid wide-release horror movies. That almost never happens nowadays. It's something for which we should be very thankful. It Follows was a creepy slow-burn of a horror movie, while Unfriended brings us an energetic and scary teen slasher movie that's over in what feels like the blink of an eye. Both are worth seeing, especially if you're a horror fan who (understandably) feels like we never get good wide-release horror. The filmmakers did something here that I didn't think was possible: They crafted a good slasher movie that takes place almost exclusively over Skype.

Bottom Line: A strong teen slasher that's fun from start to finish, Unfriended is a horror movie with something on its mind, a gimmick that works - at least for this one film - and a strong cast.

Recommendation: Horror movie fans need to see Unfriended right away. Even those who aren't the biggest fans of the genre will appreciate its intelligence, humor, and lack of jump startles.