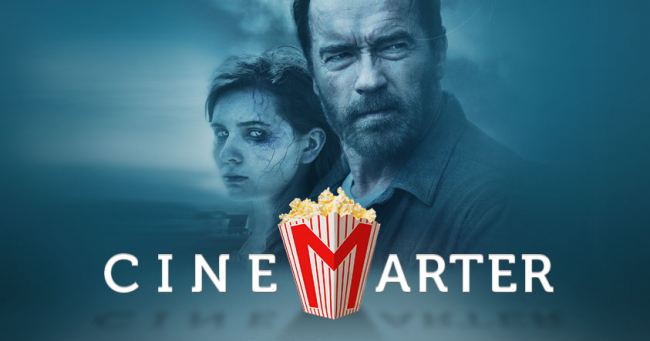 It seems almost unfathomable that in the multiple-decade acting career of Arnold Schwarzenegger, the former Governor never did a zombie movie. He's fought aliens, robots, and Batman, but zombies had never previously graced the screen alongside him. That changes with Maggie, although he only rarely fights them. Maggie is a drama about a father and his daughter, and somehow, some way, might actually have given us the best dramatic performance of Schwarzenegger's career. I never thought we'd see this day. The eyebrow-raising casting of placing Arnold Schwarzenegger in an art house zombie movie paid off - at least, as well as it realistically had the potential to.

The plot, set at some point in the near future, sees a virus break out and begin to infect humanity. It slowly turns perfectly good humans into zombies. Our lead is Wade Vogel (Schwarzenegger), whose daughter, Maggie (Abigail Breslin), is infected with the virus. In a few weeks, she'll become a zombie. Almost all of the film takes place at their home, as Maggie slowly transforms into a zombie and we see the toll that this takes not only on her, but on her family - predominantly seen through the eyes of her father. It's a tale that should be heartbreaking, and in some ways it is. Like watching a family member deteriorate thanks to any disease, watching Maggie's transformation isn't pleasant. 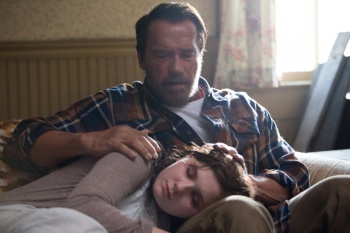 The movie, as a result, is similarly grim. It's not a fun watch - this isn't a spiritual sequel to Zombieland, Breslin's first trek through the zombie apocalypse - and it takes a lot of patience to sit through. There isn't a lot of dialogue, natural (read: candlelight) lighting is used a lot of the time, making it difficult to tell what's going on, and the pace is glacial. It's a mood piece, more akin to The Road - at least in terms of its atmosphere - than most zombie movies. There's an inevitability to the proceedings, and a choice that needs to be made at the end of it. You watch to see Wade, Maggie, and how they'll deal with the eventuality of her condition.

Maggie isn't likely to generate the same sort of tears that Telltale's The Walking Dead - particularly season one - did, though. It doesn't take us on that kind of journey, and as a result the payoff isn't as strong. It doesn't help that Schwarzenegger, while better here than he's been in a very, very long time, is still a limited-at-best actor. A good dramatic Schwarzenegger performance is an average one from a decent actor. Because of this, the potential for Maggie to function as a character study of Wade is limited. He just exists to provide a father for the father-daughter situation the filmmakers want to explore. He is not particularly important as an individual; the idea of him is more significant.