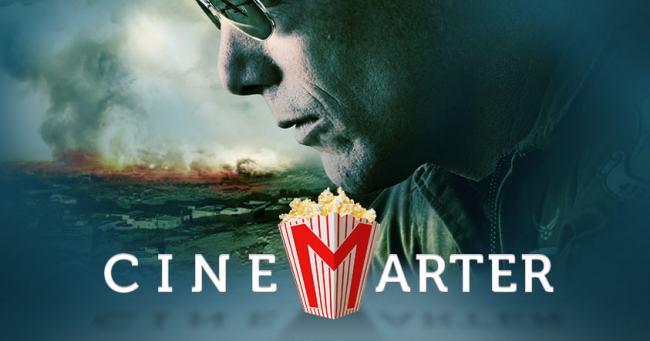 In a parallel universe, Good Kill is what eventually became of that Top Gun sequel we thought we were getting. It's a logical progression, really, and in some ways feels exactly what a Top Gun for 2015 would feel like. Instead of focusing on a hotshot pilot, it instead shows us the horrors of war through drone warfare - with the hotshot pilot having been grounded and forced to push the buttons that kill dozens of people several thousands of miles away.

The pilot isn't being played by Tom Cruise, though. Instead, Ethan Hawke takes the lead, here playing a man named Thomas Egan. Plane pilots are a thing of the past, so he's been forced into flying drones, something he hates doing. The main benefit, though, is that he can go home every day to his suburban house, his lovely wife (January Jones), and his kids. Good Kill follows Egan's day-to-day life, which allows the viewer to see the behind-the-scenes job of piloting drones - as well as the questionable morals with which the operation is run. 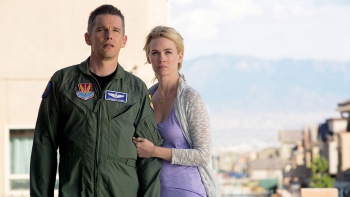 Yes, Good Kill is a movie with something on its mind. It has ideas about drone warfare. It shows us how the CIA interfered in the Air Force's operation, which saw Egan forced to commit what other characters refer to as "war crimes." Good Kill doesn't exactly have a lot of good things to say about the way the government has run its drone division. We also witness the job take its toll on the characters, much the same way that we saw war impact the mental health of the protagonist in American Sniper. It doesn't matter whether you're three feet from someone or three thousand miles away; killing another human being is hard on a normal person's state of mind.

So, the film is here to make a point, to criticize indiscriminate killing via drones and to make us aware of the impact war has on the soldiers participating in it. It probably would have had more impact had we not seen similar themes in American Sniper a few months ago, but at least the drone issue - which is the main focus for most of the running time - is fresh. However, a movie that is this single-mindedly political comes with its own share of problems.