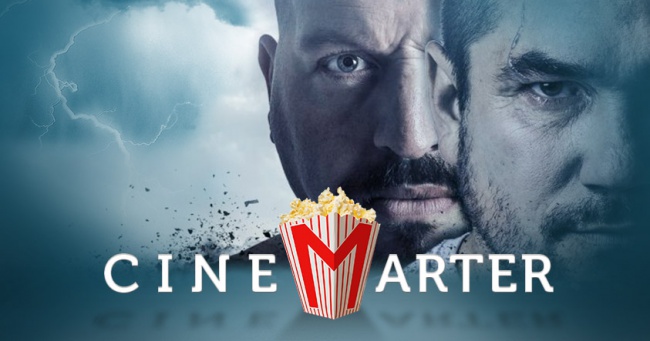 Being someone who occasionally partakes in the watching of professional wrestling, I always get a little cautious whenever a wrestler tries to make the transition into feature films. More often than not, the result is less than spectacular, to put it gently. The acting in professional wrestling often leaves a lot to be desired, even at the best of times, so it's easy to see why putting an emphasis on that in the movies doesn't often work. This time around, the wrestler-turned-actor is Paul "The Big Show" Wight, someone billed at over 7'0 tall and 400+ lbs.

Wight isn't Vendetta's lead, however. That role falls to Dean Cain, here playing a police officer named Mason whose wife is killed by an evil man named Victor (Wight), and instead of letting Victor rot in jail forever, he instead decides to kill Victor's brother, go to prison himself, and get his revenge that way. From here, the film is a series of violent murders committed either by Mason or Victor's cronies. Who needs characters or a plot when you can have tough guys kill each other until there's only one side standing? That's Vendetta's game plan, and it sticks to that plan rather admirably. 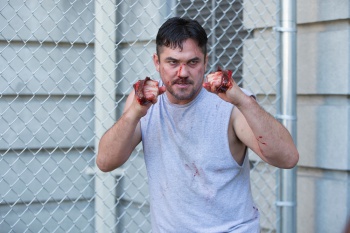 It turns out that this is probably a good idea, because whenever we start to try to get a little bit of plot or characters thrown into the mix, it all starts to fall flat. There's a warden character (Michael Eklund), who constantly makes you wonder whose side he's on, but it ultimately doesn't matter. Mason and Victor are as bland as they come, motivated by one thing and one thing only. Vendetta just wants to get to the kills as fast as humanly possible.

Vendetta has been directed by Jen and Sylvia Soska, a sister duo who had previously worked exclusively in the horror genre, bringing us the surprisingly fun Dead Hooker in a Trunk, the outstanding American Mary, and another wrestler-turned-actor movie called See No Evil 2, which was a decent sequel to the terrible original. All three of these are worth seeing, and they showcase the sisters' talent behind the camera. They're stylish films that are often beautiful even when gallons of blood are being thrown at both the characters and the audience.