Vendetta will disappoint you if you're looking for something as stylish or as smart as the Soska sisters' previous movies.

With Vendetta, the violence is gritty, not pretty. This makes sense given the film's setting. These are bulky men who use whatever tools are at their disposal to defeat their opponents. There aren't any machetes available here; we're using shanks, sinks, and ... something else that starts with "s." The "bloody" aspect of their films has carried over, though, as the only reason that Vendetta even carries with it an R rating is because of the amount of juice that gets leaked from most of the characters. Outside of the violence, this is a surprisingly tame movie, especially since most of it takes place in a prison, and prison movies often carry with them a certain reputation for more "mature" content.

How did The Big Show fair when it comes to acting? About as well as can be expected. He's here to look intimidating and beat up some dudes, and he does both of those things. He doesn't have enough of a character to do much actual acting here. He's playing a more violent version of his WWE character, so he didn't exactly have to stretch a whole lot. Dean Cain doesn't exactly do any better, and he's been in movies and TV shows before. He's more experienced, but he's not a particularly good lead here. We can't even believe in his quest for vengeance, and that's the singular driving force of the movie. Michael Eklund gets to have some fun as the warden, but that's about all that can be said of him. This isn't an actors' film; it's a movie where people fight to the death for 90 minutes and maybe one of them will survive at the end. Maybe. 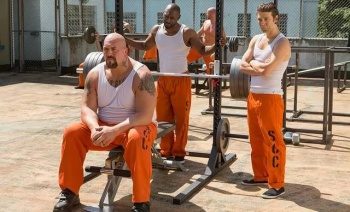 Vendetta will disappoint you if you're looking for something as stylish or as smart as the Soska sisters' previous movies. It doesn't have enough of a plot or strong enough characters to work on any sort of intellectual level. If all you're looking for is a no-holds-barred prison movie, then I guess you'll be satisfied, although even then, you can't really empathize with the lead character, as his quest for revenge fails to emotionally impact the audience. It's violent and bloody, but it's little more. The Soska sisters now have a bad movie under their belts. Hopefully this doesn't dissuade them from stepping away from the horror genre in the future; they show promise here, even though the film ultimately didn't work.

Bottom Line: Vendetta has blood to spare, but unfortunately not much in terms of characters, plot, or acting.

Recommendation: I'm sure there are some people out there dying for a bloody prison movie, but those people would be better off watching the first half of The Raid 2.