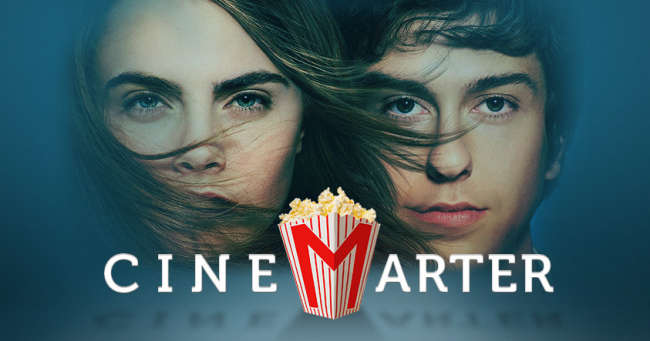 If you've seen the trailer for Paper Towns, you no doubt are going to think it looks like another generic teen romance movie in which an unpopular high school boy falls in love with the popular girl - only in this case, the girl goes missing and the boy has to track her down in order to, I don't know, "rescue" her or something. Thankfully, the marketing department has once again let us down, because Paper Towns actually avoids many of the genre's clichés, has a decent amount of depth, and contains more than a few laughs.

The story begins in a way that seems less than original. "Q" (Nat Wolff) has lived across the street from Margo (Cara Delevingne) since he was a young child. They used to be good friends, but drifted apart as they grew older; they haven't even had a meaningful conversation in years. She became popular - although enigmatic - while he became a band nerd. One night, though, Margo climbs through his window and asks for his help to enact revenge on her cheating boyfriend and the friends who knew about it. The next day, Margo disappears. Q believes it's his destiny to find out where she went, and spends the rest of the movie looking for her, sometimes joined by his friends, Ben (Austin Abrams) and Radar (Justice Smith), one of Margo's friends, Lacey (Halston Sage), and Radar's girlfriend, Angela (Jaz Sinclair). 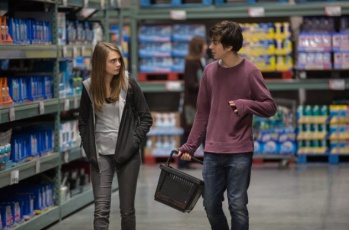 If you think you know how it all plays out just from this brief outline, you're probably only partially correct. In a typical movie, Q would find Margo and the two would fall in love, making everything in the world okay for just a brief moment. In Paper Towns, though, that's at least partially subverted. In fact, there's a good deal more to Paper Towns than one would initially think. For example, Margo is essentially the dictionary definition of "Manic Pixie Dream Girl," but while most movies adhere to all of the tropes that go along with that character type, Paper Towns uses her to essentially showcase everything wrong with it - and what's wrong with building up someone in your head without getting to know them first. It's a debunking of the mythology surrounding something over which far too many movie characters lust.

The majority of Paper Towns acts as a road trip movie. Characters talk and bond, the stops provide much of the excitement, and the journey is very often far more interesting than the destination. All of this is true here. In fact, some of the best parts of the film involve Q and his buddies ruminating on the finality of high school, where they'll be in the future, and even if they'll stay friends. Other scenes see them just goofing off, like when they encounter a scary situation and sing the Pokémon theme song - one of my favorite scenes in the entire movie. What the film does wonderfully is taking mundane scenes and making them enlightening and entertaining.