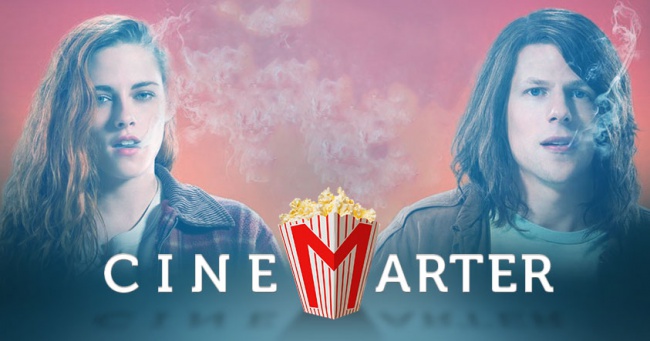 When I tried to explain the premise of American Ultra to my non-film friends, colleagues, and family members, I got more than a couple of odd looks. I guess it is, indeed, quite a difficult premise to believe. Here it is: a stoner living in a small town turns out to be a sleeper agent, and he gets activated just as the government decides to terminate him. Action scenes ensue. The idea is to provide us with a Pineapple Express for 2015, although the buddy-buddy elements have been replaced with a more traditional romance.

The stoner is played by Jesse Eisenberg, who has played a stoner before in 30 Minutes or Less, which seems counterproductive to me. One of the strengths of Eisenberg as an actor is his energy and the lightning-quick speed at which he can coherently deliver lines. Having him under the influence of marijuana takes away both of those. The girlfriend is played by Kristen Stewart, who fits into a stoner role much more naturally. The CIA agent trying to kill them is played by Topher Grace, and there's also a good one played by Connie Britton who tries to help them. 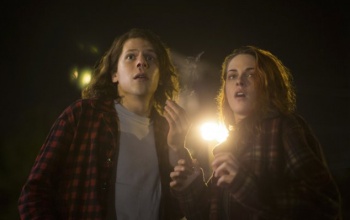 Most of it serves as an elaborate setup to give us action scenes in which Eisenberg kills a bunch of unnamed henchmen using unconventional tactics and then freaking out about it, since he didn't know he had these skills and still maintained his stoner personality. Without the drugs, this would be a straight try-to-survive-the-situation movie, more or less like No Escape, which is out next week. We get some laughs because of his reactions to the outlandish things he's able to do, and because the tone of the entire movie is decidedly less than serious.

Is it funny? Is the action any good? Well, here is what my tally wound up being: approximately a dozen laughs and one good action scene. If that's enough to get you to the cinema, then that's enough to get you to the cinema, I guess. It's a short movie, so 12 laughs over 90 minutes means you're getting a laugh every 7.5 minutes. That's not a great number for a comedy, but you can do a lot worse. The strong action scene comes at the end, when we go into rescue-the-princess mode and we get one lengthy scene inside of a supermarket. The action before that isn't particularly interesting or even that well-made - Eisenberg isn't an action hero, after all. It acts as a fun little diversion, but nothing more.